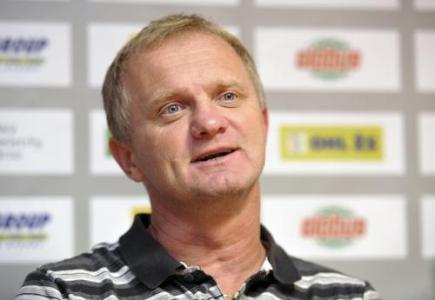 Zdenek Venera was born September 20, 1957 in Hranice, married with wife and Jindfiska born him two sons - Thomas (1979) and James (1983). In Zlin, debuted in the 1973/74 season at sixteen and spent fifteen years here with a two-year military service in Trencin. In 1976 he played in the ME 18, was one of the best backs the league, but the representation "and" CKA never received. In 1985 he was the first success then TJG in the highest competition when the team occupied the third city of Bata place. In 1988 he left Denmark to finish a career, where he served three years under coach Justrou in Frederikshavn and during the early season, pushed the team to the championship title. Then hang the skates cloves and started coaching. First trained younger and older adolescents in Vsetín. Then he returned to Zlin, where he helped youths to the title of champion, and in 97 and 98 always played juniors finals. In December 1997, the club appealed Eduard Novak and commissioned Venere temporary leadership team.Premiere dismissed 30th December in Opava and the right team won 4:3. Despite the improved results could Zlin delete the previous losses and the playoffs did not advance. After the season he wanted to return to the Venera and youths to continue in business activities, but newcomers Stavjaňa Anthony, a former teammate, I have someone to help him in the first year to look around the club. Zlin led by a pair of Venera-Stavjaňa advanced to the playoffs, he created a series of 24 wins at home, without interruption, and success crowned the second place, though not enough just to Vsetin. Ing.Zdeněk Venera he became coach of the year, but still decided to return to puppy.

There lasted only one season and had to convince to return to the bench men. With Anthony Stavjaňou Zlin got back into the playoffs from the eighth partition (2000/01) and in the quarterfinals Vsetin uncomfortable journey for the last title. After leaving the Venera Stavjani took place again and head coach, "Rams" won a record number of points in the base part (92). After a huge battle in the quarterfinals to Znojmo his charges are insufficient to Vitkovice. In season 2002/03 the Venera moved to the post manager and assistant gen. Bohumil manager goat. The club's planned move to the highest post, but entry into the team competition was disastrous.After commanding the 14.kole Stavjaňa because HC Hame won nine times in a row. Venera on such short notice and took over the team managed in nine games to get 15 points, but the shift of the last rail was not enough skepticism and a whole fell from already recovered.

From the 2005/06 season to become coach of HC Energie Karlovy Vary. Years begin building a quality team that is already paid in the following season 2006/07 the team progresses to the seventh place playoff rounds (where succumbs Třinec). A season later, Mr. Venera can best performance for the entire period of training energy and direct approach to the playoffs from the fourth place in the base part. In the first round encounter at the team Litvinov, who clearly beat 4-1 in matches.

In the semifinals, comes one of the toughest opponents, and the winner is the fundamental part of the Czech Budejovice. Opened up the team but not stop it and after seven match battle that comes out better for players of Karlovy Vary, proceed to the finals, which is waiting for Slavia Prague. Although energy was a match finals series and follow through to a decisive seventh game, succumbed at the O2 Arena, home Slavia 4:2 and 4:3 in overall matches. Despite the defeat, the participation in the final playoff Extraliga hockey Carlsbad biggest success ever. The greatest credit for this success is mainly coach Venera, who was able to build a team that is no longer in the bottom of the table and now trains in HC Kometa Brno

Retrieved from "https://icehockey.fandom.com/wiki/Zden%C4%9Bk_Venera?oldid=276153"
Community content is available under CC-BY-SA unless otherwise noted.