The Yale Men's Ice Hockey team is the oldest existing intercollegiate hockey program, having played its first game in 1896 against Johns Hopkins (a 2-2 tie).

The men's ice hockey team plays at Ingalls Rink, also called the Yale Whale. The current head coach is Keith Allain, who led the Bulldogs to an Ivy League championship in his first year as head coach (2006-2007 season). Allain is assisted by Carl "CJ" Marottolo, Kyle Wallack, and Mike Richter.

This is a partial list of the last five seasons completed by the Wolverines. 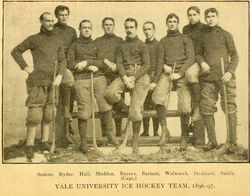