The Wisconsin Windigo formerly the Minnesota Magicians are a junior hockey team in the North American Hockey League. The team is based out of the Eagle River Sports Arena in Eagle River, Wisconsin. Previously they were based in Richfield, Minnesota, the Magicians played their home games at Richfield Ice Arena.

The Minnesota Magicians were founded in 2013 by the Minnesota Junior Hockey Group, and currently compete within the Midwest Division of the North American Hockey League (NAHL). The team plays its home games at Richfield Ice Arena, an 1,800 seat facility located in the Minneapolis suburb of Richfield.

On May 17, 2016 the NA3HL announced that the ownership of the team had been approved to purchase the Chicago Jr. Bulldogs of the North American 3 Hockey League. The announcement also unveiled a new team logo and colors which are very similar to the Magicians.

On March 16, 2022 the league announced that the Minnesota Magicians had been sold and would relocate to the Eagle River Sports Arena in Eagle River, Wisconsin for the 2022-23 season.[1] On May 3, 2022 the team was announced as being renamed the Wisconsin Windigo.[2] 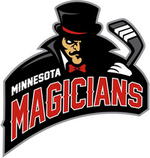