Winnipeg Arena was an indoor arena located at 1430 Maroons Road in Winnipeg, Manitoba, across the street from Canad Inns Stadium.

Built in 1955, it was owned by community-owned Winnipeg Enterprises Corporation. At the time of the arena's construction, Enterprises was headed by prominent businessman Culver Riley and had borrowed about $2.5 million, most of it from the City of Winnipeg, to build the Arena. At the time, Winnipeg was Canada's third largest city and the new Winnipeg Arena was considered to be the finest facility in the western half of North America. The building's first major tenant was the Winnipeg Warriors (minor pro) of the Western Hockey League (minor pro) from 1955–1961. Its major tenant subsequently was the Winnipeg Jets of the WHA and the NHL from 1972-1996. In 1972 the Winnipeg Arena hosted game 3 of the famous "Summit Series" between Team Canada and the USSR. The game ended in a 4–4 tie. Following the departure of the Jets to Phoenix, Arizona, the Arena's prime tenant from 1996-2004 was the Manitoba Moose of the International Hockey League, and later of the American Hockey League.

The Winnipeg Arena was also home to the Winnipeg Warriors of the (Junior) WHL from 1980 through 1984 prior to the Warriors relocation to Moose Jaw, Saskatchewan, and the Winnipeg Monarchs of the same league in the 1960s and 70s. Also a popular location for filming movies, the building was used in the made-for-television Inside the Osmonds and the ESPN film A Season on the Brink. It hosted the fourth WWF In Your House pay-per-view in 1995.

The arena opened October 18, 1955 with the first regular season game between the Winnipeg Warriors (minor pro) and the Calgary Stampeders. The ceremonial opening faceoff was conducted by J. D. Perrin, President of the Warriors Hockey Club, before a sell-out crowd (including standing room) of 9,671. This was, at the time, the largest crowd in WHL history. The occasion marked the return of professional hockey to Winnipeg after a 27-year absence. The building sat 9,500 at its opening and replaced the obsolete Shea's Amphitheatre. In 1956, J. D. Perrin made an offer to purchase the Winnipeg Arena, Stadium, and Baseball Park Complex from Winnipeg Enterprises. In keeping with the tenor of the times, when public ownership was thought to be advantageous, the offer was rejected.

Renovations in 1979 expanded capacity to 15,565. That same year, a painting of Queen Elizabeth II was commissioned for the Arena by Manitoba's Lieutenant Governor, Francis Lawrence Jobin. Gilbert Burch did the painting, which measured 5x7 metres (one of the largest ever painted of the Queen) and hung from the Arena rafters.

In 1998, two years after the Jets left, another renovation took place. Club seats were added, and the North End ice level seats were replaced with a club lounge. The portrait of the Queen was also removed; as of 2007, it sits in a Whitby, Ontario storage facility and is for sale.

The Winnipeg Arena earned the nickname of the "White House" amongst locals for its traditional White Out during Jets' playoff games.

Due to the opening of the MTS Centre, the Winnipeg Arena's demolition was approved, with the Arena holding its last event on November 7, 2004. The City of Winnipeg took on the $1.45 million expense of demolishing the now-vacant arena. Final demolition was scheduled for 7:15am on Sunday March 26, 2006. However, the dynamite failed to bring the entire structure down. Hours later, construction vehicles pulled down the rest of the structure.

The Ontario Teacher's Pension Plan Board, or "Ontrea Inc.", purchased the Winnipeg Arena site for $3.6 million. The land is now being used as a parking lot for the Blue Bombers, and is expected to be used for retail. 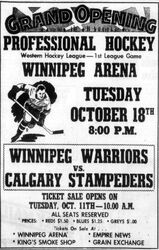 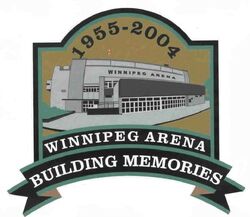