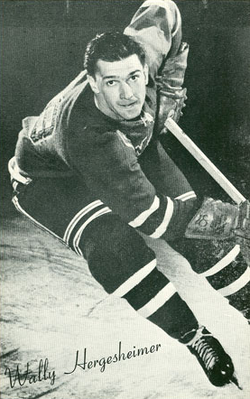 Hergesheimer started his National Hockey League career with the New York Rangers. He would also play with the Chicago Black Hawks. His career lasted from 1952 to 1959. His brother was Phil Hergesheimer.

He played in the Manitoba Junior Hockey League until 1947 when he turned pro. He played in the minor pros until he made the New York Rangers in 1951-52. Wally played four seasons with the Rangers and then was traded to the Chicago Blackhawks in 1956. He played another 22 games with the Rangers in 1958-59 before finishing his career in the minor pros in 1962.

Retrieved from "https://icehockey.fandom.com/wiki/Wally_Hergesheimer?oldid=564964"
Community content is available under CC-BY-SA unless otherwise noted.