The Verdun Maple Leafs was the name of three ice hockey clubs that existed in Verdun, Quebec, including a senior hockey team, and two junior teams. The Maple Leafs played home games at the Verdun Auditorium.

The first club was a senior hockey team established in the early 1920s. They played in the Montreal City Hockey League until 1937, then switched to the Quebec Senior Hockey League. The team folded after 1942 during World War II. This senior team coexisted with its farm club, a junior team from 1933 to 1950, also known as the Maple Leafs. Verdun were finalists for the Eastern Canadian Championship and the George Richardson Memorial Trophy in 1939 and 1940, but lost both times to the Oshawa Generals.

The Verdun Maple Leafs were revived again in 1958 playing in the Metropolitan Montreal Junior League. Verdun challenged against for the Eastern Canadian Championship in 1968, but were defeated bt the Niagara Falls Flyers. It then joined the Quebec Major Junior Hockey League when the Metropolitan and Quebec Jr.A leagues merged, and played from 1969 to 1972. Serge Martel won the Michel Bergeron Trophy as the league's rookie of the year, playing for Verdun in 1969–70.

List of alumni from the Verdun Maple Leafs who also played in the National Hockey League. Two Hockey Hall of Fame members played for the Maple Leafs. Émile Bouchard and Maurice Richard were teammates during the 1939–40 season. 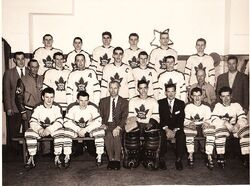