This league was a product of the military build up in the area during World War II. The Pacific Coast was a poor area for amateur hockey before the war but the large influx of miltary personnel boosted the sport.

Although the league only lasted a year, some of the teams played in the Pacific Coast Senior Hockey Association in the following season. 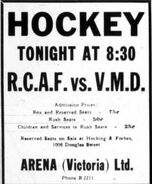 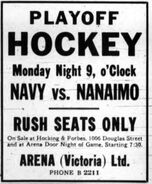 Victoria Radio Ad
Add a photo to this gallery 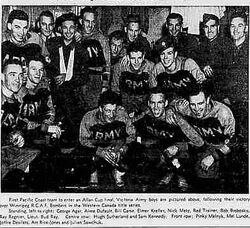 Victoria Army
Add a photo to this gallery

Retrieved from "https://icehockey.fandom.com/wiki/Vancouver_Island_Senior_League?oldid=604543"
Community content is available under CC-BY-SA unless otherwise noted.