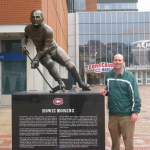 My inspiration came from Andria Hunter, who was one of the first to create a website devoted solely to women’s ice hockey. Since then, Jaclyn Hawkins' excellent web site Women's Hockey Life, became a source of motivation. Having proudly contributed content, it has served as a career highlight. In addition, I write a women’s ice hockey blog on blogspot, and you can also follow me on twitter.

Retrieved from "https://icehockey.fandom.com/wiki/User:Mark_Staffieri?oldid=555137"
Community content is available under CC-BY-SA unless otherwise noted.