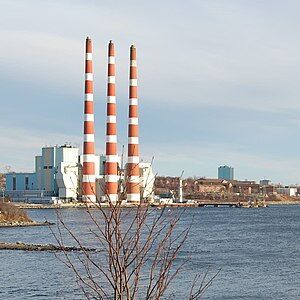 Tuft's Cove is a neighbourhood in the Dartmouth section of the Halifax Regional Municipality in Nova Scotia.

The area is believed to be home to the first known site of a stick and puck game with goals played on ice. The Mi'kmaq played a game with 8 men on each team and a wooden puck.[1] The area is located along the shore of Halifax Harbour. The area was destroyed in the Halifax Explosion of December 6, 1917. The site of these games is believed to be near where the Tufts Cove Generating Station is presently located which is a predominant feature along the Dartmouth shoreline in the Narrows between the MacKay and Macdonald Bridges when viewed from Halifax.