Other Toronto Marlboros teams include a senior ice hockey team which competed for the Stanley Cup in 1904 and won the Allan Cup in 1950, a major senior team in 1950-51, and a Minor Hockey team, which has operated continuously since 1931.

The Toronto Marlborough Athletic Club was started in Toronto, Ontario in 1903 by a group of Toronto sportsmen. It was named after the Duke of Marlborough. A hockey program was started in 1904. The team was commonly known as the Marlboros or Marlies and was also nicknamed the Dukes.

In the early years, the Marlboros were just one of many athletic clubs and junior hockey teams in and around Toronto that played in relative obscurity in the history books. The club was thrust onto the national scene in 1927 when Conn Smythe bought the Toronto Marlboros to be the farm team for his other recently acquired team, the Toronto Maple Leafs. From 1927 to 1989 the Marlboros and Maple Leafs shared common ownership first in the Smythe family and later in Harold Ballard. Upon the death of Conn Smythe, his son Stafford Smythe inherited the teams, and later sold a portion of both clubs to Harold Ballard. Ballard became sole owner of both teams upon the passing of Stafford Smythe.

The Marlboros served as a farm team for the Maple Leafs for 40 years until direct NHL sponsorship of junior teams ended in 1967, however the two clubs continued to remain affiliated under a common ownership until 1989. During this time the Marlboros sent over 180 players to the NHL and six future Hockey Hall of Fame inductees. The two teams often played double headers on Saturdays, with the junior games in the afternoon and the NHL games in the evening.

Marlboro players from the Memorial Cups in the 1950s and 1960s jumped directly to the Maple Leafs, helping them win the Stanley Cup four times in the 1960s. Former NHL stars stayed in the organization to help coach in the junior ranks. Turk Broda and George Armstrong both coached the Marlboros to Memorial Cup victories. 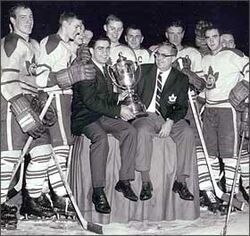 Stafford Smythe organized the Metro Junior A League in 1961 as a rival league to the OHA, with the Marlboros as its charter member. After the league folded in 1963, the Marlboros scooped up all the former stars from the Toronto Neil McNeil Maroons who had won two consecutive Metro Junior A league titles, and also retained their coach, Jim Gregory. The 1964 Marlboros were one of the strongest teams in Canadian junior history.

The Marlboros returned to prominence again in 1973, coached by former Toronto Maple Leafs captain George Armstrong. Armstrong's team in 1973 lost only seven games all season, and two years later he coached the Marlboros to their seventh national title in 1975.

The team began to take a decline in the standings in the late 1970s which continued through the 1980s. Many people felt that Harold Ballard's penny-pinching ways helped contribute to the demise of Canada's most successful junior team. After the 1988–89 season the Toronto Marlboros were sold, and they severed ties with the Maple Leafs. The OHA team moved to Hamilton, becoming the Dukes of Hamilton. They were not financially successful in Hamilton, though, and after only two seasons the Dukes became the Guelph Storm.

The Toronto Marlboros won Memorial Cup seven times, more than any other team in the Cup's history. The Marlies also won 10 OHA championships in 17 final appearances.

1929
The Marlboros reached their first Memorial Cup series in 1929 after being upset in 1928 by the Ottawa Gunners. In 1929 the Marlboros defeated the Ottawa Shamrocks in a two-game total goals series by 6 to 5. Ottawa won the first game 4 to 3, and Toronto won the second game 3 to 1.

Toronto played the Elmwood Millionaires from Winnipeg, Manitoba, in a best of three series starting on March 29 at the Arena Gardens (Mutual Street Arena) for the Memorial Cup. The Marlboros won the first game 4 to 2 in overtime. On March 31, Toronto won game 2 by an identical score of 4 to 2 for its first Memorial Cup.

1955
Turk Broda took over the coaching duties of the Marlboros midway through the 1954–55 season. In the playoffs the Marlboros defeated the reigning Memorial Cup champions St. Catharines Teepees, followed by the Quebec Frontenacs to win the Eastern Canadian championship.

After a long train ride to Regina, Saskatchewan, to Marlboros and the Regina Pats took part in the First Annual Memorial Cup Dinner. The idea of the banquet was one of Harold Ballard's many long lasting effects on the game. The next day the two teams would start a best of seven series for the Cup.

Regina won the first game 3 to 1. Toronto won the next two games scores of 5 to 2, and 3 to 2. Regina tied up game four at 2 goals each in the dying minutes of regulation to send the match to overtime. Billy Harris scored in overtime to give the Marlboros a 3 games to 1 lead. Game five was also tied after three periods. Toronto scored three unanswered goals, winning 8 to 5 in overtime, and their second Memorial Cup.

1956
Toronto defeated the Montreal Junior Canadiens in an 8-game series to return to the Memorial Cup and a rematch versus the Regina Pats. The championship series started at Maple Leaf Gardens on April 27.

The teams tied the first game at 4 goals each. Toronto put together three consecutive victories by scores of 5 to 1, 4 to 2, and 6 to 1. The Marlboros captured their second consecutive Memorial Cup in game five by a score ot 7 to 4. The Oshawa Generals were the first team to accomplish the feat in 1938–39 and 1939–40.

The series opened at Maple Leaf Gardens with a 5 to 2 Toronto victory. The Marlboros won games two and three with scores of 3 to 2 and 5 to 2. Toronto finished the series sweep with a 7 to 2 win in game 4. Many of the players on the 1964 Marlboros team, including Ron Ellis, Mike Walton and Pete Stemkowski, helped the Maple Leafs capture the Stanley Cup in 1967.

1967
Toronto defeated the Montreal Jr. Canadiens and Hamilton Red Wings for the OHA title, then eliminated the Thetford Mines Canadiens to capture the eastern Canadian championships. The Marlboros played the Port Arthur Marrs in the Memorial Cup series hosted at the Fort William Gardens in what is now the city of Thunder Bay, Ontario.

1973
The Marlboros of 1972–73 lost only seven games in the regular season. The team was ranked # 1 in Canada going into the playoffs. Toronto eliminated the St. Catharines Black Hawks and Ottawa 67's before meeting the Peterborough Petes in the OHA finals.

The series versus the Petes went to a seventh game played at Maple Leaf Gardens in front of 16,485 spectators, a record at the time for junior hockey attendance. Toronto needed only a tie game to advance, and did so in dramatic fashion. Paulin Bordeleau scored on a penalty shot in the last minute to tie the game at 5 goals each.

After winning the OHA title, the Marlboros travelled to Memorial Cup hosted at the Montreal Forum where their opponents would be the Quebec Remparts and the Medicine Hat Tigers, who were led by future NHL star Lanny McDonald.

The Marlies beat Quebec 5 to 2 in the first game, and lost 3 to 2 to the Tigers in the second game. The Remparts then beat the Tigers 8 to 3 in game three. Since each team had won a game, Toronto and Quebec played each other in the finals based on goals for and against. The Marlboros scored a 9 to 1 victory for their 6th Memorial Cup.

1975
The 1975 playoff run for the Marlboros was complicated by Mark Napier and John Tonelli signing professional contracts before the season ended. Tonelli would sit out all the Marlboros games after his 18th birthday so he would not the jeopardize playing for the Houston Aeros.

Toronto stumbled through the playoffs managing come-from-behind victories in series versus the 8th place Kingston Canadians and 5th place Sudbury Wolves. Both series went 8 games, and the Marlboros were a point away from being eliminated each time but stayed alive. The Marlboros then beat the Hamilton Fincups in the finals for their last OHA championship. Toronto would face the New Westminster Bruins, and the Sherbrooke Castors in the Memorial Cup series played at the Kitchener Memorial Auditorium Complex.

Toronto beat Sherbrooke 5 to 4 in overtime in game 1 after coming back from three goals down. The Bruins beat the Castors (Beavers in English) 7 to 5 in game two, defeated Toronto 6 to 2 in the third game to reach the finals. In a rematch versus the Castors in the semi-final, Toronto won 10 to 4 to reach the finals versus New Westminster.

The Marlboros continued their momentum in the finals winning 7 to 3, and capturing their seventh and final Memorial Cup championship. Coach Armstrong said it was all worth it, even after his team had tossed him into the hotel swimming pool during a victory party.

One of the most famous Maple Leafs and Marlboros of all time, George Armstrong, coached the Marlboros to their final two Memorial Cup victories in 1972–73 and 1974–75.

Two Toronto Marlboros coaches have been awarded the Matt Leyden Trophy as the OHA Coach of the Year. They are George Armstrong 1972-73 in his first year, and Dave Chambers in 1979–80.

Until the NHL instituted the Entry Draft in 1967, the Maple Leafs relied heavily on the Jr. A. Marlboros to produce NHL players. Many players were part of Maple Leafs Stanley Cup winning teams. In total, 202 OHA Junior Marlboros went on to play in the National Hockey League.

In 1903 club secretary Fred Waghorne wrote to the Duke of Marlborough in England for permission to use the storied name and crest. In choosing its logo the club took the Marlborough family crown and added the initials A.C. for Athletic Club.

The Toronto Marlboros used the same colour scheme as the NHL Toronto Maple Leafs from 1927 when the two club came under common ownership. The Marlborough crown was originally displayed by itself on the jersey chest. It was not until the late 1950s that the crown was set against the present day Maple Leaf.

In the beginning both the Toronto Maple Leafs and the Marlboros practised and were headquartered out of the old Ravina Gardens in Toronto's west end. Home games were played downtown at the Mutual Street Arena.

The Marlboros occasionally also played games in the 1970s at the North York Centennial Centre and the Markham Centennial Centre when Maple Leaf Gardens was unavailable, usually due to scheduling conflicts at MLG with both the Toronto Maple Leafs and also the Toronto Toros of the WHA. They also played part of their home schedule in the 1976–77 season in Brantford, Ontario out of the Brantford Civic Centre.

The Toronto Marlboros Hockey Club operates minor hockey teams in the city of Toronto, Ontario. This club operated independently to the former OHA Junior 'A' team. After the Junior 'A' team left for Hamilton, the late Toronto Maple Leafs owner Harold Ballard granted permission for the Minor Marlboros to retain and carry on the Marlborough name. Three years later in the fall of 1992 the Marlboros combined their fabled crest with the current NHL Maple Leafs' uniform. The Minor Marlboros celebrated their 75th anniversary in 2005–06. 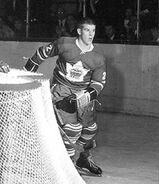