Ice Hockey Wiki
Register
Don't have an account?
Sign In
Advertisement
in: Born in 1903, Dead in 1981, Canadian ice hockey players,
and 16 more

Cecil Ralph "Tiny" Thompson (May 31, 1903 – February 9, 1981) was a Canadian professional goaltender. He played 12 seasons in the National Hockey League (NHL), first for the Boston Bruins, and later for the Detroit Red Wings. A four-time Vezina Trophy winner, Thompson was inducted into the Hockey Hall of Fame in 1959. He was a member of one Stanley Cup-winning team, as a rookie in the 1928–29 season with the Boston Bruins. At the start of the 1938–39 season, after ten full seasons with Boston, he was traded to the Detroit Red Wings, where he completed the season, and played another full one before retiring. During his NHL career, he recorded 81 shutouts, the sixth highest of any goaltender. After retiring from playing, he coached lower-league teams before becoming a noted professional scout. Thompson helped popularize the technique of catching the puck as a method of making a save. A competent puckhandler, he was the first goaltender in the NHL to record an assist by passing the puck with his stick to a fellow player.

Born in Sandon, British Columbia on May 31, 1903, Thompson grew up in Calgary, Alberta, where his brother, Paul, who also became a professional ice hockey player, was born in 1906. As a child, he enjoyed playing baseball and ice hockey. Initially, Thompson was not a goaltender, though he agreed to play the position to get into games. As a teenager playing competitive ice hockey, he acquired the nickname "Tiny" as a joke, as he was the tallest player on team, standing 5 feet 10 inches, the nickname stuck with him for the rest of his career.

Thompson began his junior career playing for the Calgary Monarchs in 1919 at the age of 16. He competed for the Memorial Cup, playing in two games and surrendering 11 goals, a respectable amount in that era. After spending the 1920–21 season playing for Calgary Alberta Pacific, Thompson played three seasons in Bellevue, Alberta. In the 1924–25 season, he joined the Duluth Hornets, playing 40 games, recording a shutout in 11 of them. The following season, Thompson joined the Minneapolis Millers of the American Hockey Association (AHA). In his three seasons with the Millers, he appeared in 118 games, recording 33 shutouts with a 1.37 goals against average (average of goals surrendered in a span of sixty minutes).

Thompson began his National Hockey League (NHL) career with the Boston Bruins in the 1928–29 season after his contract was purchased by Boston manager Art Ross, who had never seen him play before, owing to his good reputation in Minnesota. In his first game he posted a shutout, becoming the only Hockey Hall of Fame goaltender to accomplish this feat. In his first season, he appeared in all 44 of the Bruins' games, posting 12 shutouts and a 1.15 goals-against average, the second lowest goals-against average in NHL history through the 2008 season, after George Hainsworth's 0.98 the same season. Placing first in the American Division, the Bruins had a perfect record in the playoffs en route to their first Stanley Cup victory, defeating the Montreal Canadiens and the New York Rangers. Thompson recorded three shutouts in the five playoff games, and gave only three goals. That season marked the first time two brothers opposed each other in an NHL game, as Thompson's brother Paul played for the New York Rangers. The Stanley Cup finals were also the first playoff series where two brothers faced off against each other.

The following season, Thompson again appeared in all of the Bruins' 44 games, posting three shutouts and a 2.19 goals-against average. The league changed its rules on forward passing, which resulted in a sharp increase in goalscoring. Boston won all but six games, finishing with a 38–5–1 record, the best winning percentage for any team in a season. Surrendering only 98 goals, Thompson bested Chicago goaltender Charlie Gardiner to win the first of his four Vezina Trophies. The Vezina Trophy is awarded to the league's top goaltender, which was determined prior to the 1981–82 season by number of goals surrendered by goaltenders who had played a minimum number of games. In the playoffs, however, they suffered their first two-game losing streak, as they were swept 2–0 by the Canadiens in the Stanley Cup finals. Earlier in the playoffs, Thompson's winning streak of seven playoff games was snapped; it remains, as of 2008, the longest playoff winning streak to start a career.

In the 1930–31 season, he played all 44 games again, and was named to the Second All-Star team. The following season, Boston lost the semifinals to the Montreal Canadiens; during game two of the series Thompson became the first goaltender to be pulled for a sixth attacker at the end of a game to give his team a higher chance to score a goal. Even though Boston still lost, coach Art Ross' maneuver was described as "amazing" the following day, and this technique, known as "open net", caught on with the rest of the league.

The Bruins missed the playoffs for the first time in Thompson's career in the 1931–32 season. He won only 13 games while appearing in 43 out of Boston's 48 games, which was the only time he missed games as a member of the Bruins. The next season, Boston made the playoffs once more, losing to the Toronto Maple Leafs. The final game of the playoff series was described as Thompson's most memorable. During that game, Toronto and Boston were tied after regulation time and over 100 minutes of overtime proceeded, with Thompson dueling Toronto's goaltender Lorne Chabot. After the end of the fifth overtime period, managers Conn Smythe of the Maple Leafs and Art Ross of the Bruins asked league president Frank Calder to suspend the game, but Calder refused. Early in the sixth overtime period, a pass from Boston defenseman Eddie Shore was intercepted, and Ken Doraty skated in on a breakaway, cleanly beating Thompson at 4:46 of the period. The losing goaltender in the second-longest NHL game, Thompson received a standing ovation from fans at the Maple Leaf Gardens. Thompson finished the playoff series with 1.23 goals-against average, despite a losing record.

Thompson became the second goaltender to win his second Vezina Trophy in 1932–33 since its inception in the 1926–27 season, as he recorded 11 shutouts and a 1.76 goals-against average. After missing the playoffs in the 1933–34 season, they rebounded to first place in the American Division the following season, as Thompson was named to the Second All-Star team for the second time.

In the 1935–36 NHL season, Thompson recorded 10 shutouts, but Boston managed to win only 22 out of their 48 games. During the season, he recorded an assist, a rarity for goaltenders. At the end of the season, he was named to the First All-Star team for the first time,and won the Vezina Trophy for the third time. In the 1937–38, his final full season with the Bruins, he won 30 out of the 48 games, but Boston lost to the Maple Leafs once again in the playoffs. Thompson set a new record by winning his fourth Vezina Trophy, which was his last victory. He was also named to the First All-Star team for the second time.

Thompson appeared in only five games for the Bruins in the 1938–39 season, as Boston decided to replace the aging goaltender with the substantially younger Frank Brimsek. Brimsek wold go on to lead the Bruins to a Stanley Cup victory that season, earning the nickname "Mister Zero" while picking up 10 regular season shutouts, the Vezina Trophy, First All-Star Team honours, and the Calder Memorial Trophy. To make space for Brimsek, Thompson was traded to the Detroit Red Wings for Normie Smith and $15,000; Thompson also received a $1,000 bonus from Boston.

Boston manager Art Ross predicted that Thompson, now 35, would play for the Red Wings for at least another five seasons; however, Thompson remained with the team for only two seasons before retiring from playing. The Red Wings posted a losing record in both of these seasons, although they made the playoffs both times. Overall, Thompson appeared in 85 regular season games for Detroit, recording a 32–41–12 record, seven shutouts, and a 2.54 goals-against average, and in 11 playoff games, posting a 5–6, with one shutout and a 2.41 goal-against average.

After retiring from professional play, Thompson became the head coach of the Buffalo Bisons of the American Hockey League (AHL) in the 1940–41 season. He coached 56 games in two seasons. The Bisons missed the playoffs both seasons. He appeared in one game as goaltender in the 1940–41 season. During World War II, Thompson served in the Royal Canadian Air Force and doubled as the coach of the Calgary RCAF Mustangs of the Alberta Senior Hockey League. He led the Mustangs to the league championship series in the 1942–43 Alberta Senior playoffs against the Calgary Currie Army team when injuries to the Mustangs' goaltenders brought him back onto the ice in March 1943. With Thompson in goal, the Mustangs defeated Currie Army 8–4 to tie the best-of-five series at two wins apiece. He played the deciding game, but his team fell short of winning the Alberta title with a 3–1 loss to Currie Army. After the war, Thompson became chief Western Canada scout for the Chicago Black Hawks. He was one of few scouts who sought to discover a player's personality along with their playing ability, often conversing with players as part of efforts to learn about the players he was watching.

Thompson was a stand-up goaltender, rarely falling on both knees to stop a puck. He was one of the first NHL goaltenders to catch the puck with his hand to make a save, and helped popularize the technique. Using gloves that were smaller than those of other players, he was among the best puck-catchers of his era. He stood in the way of the puck with minimal padding, risking being struck when moving to catch it instead of simply deflecting it away from the net. His signature technique, very often featured in photographs of him, involved dropping to one knee with the paddle of his goalstick covering the five-hole, and extending his glove to cover the left side of the net. Although he caught the puck with his glove, he did so without gloves resembling the modern blocker and trapper glove combination. Thompson was described by Johnny Bower, a former goaltender who was inducted into the Hockey Hall of Fame, as a good puckhandler, and one of the best of his time at forward passing. In the 1935–36 season, Thompson became the first goaltender to get an assist by intentionally passing the puck with his stick to a fellow player. Thompson was not the first goaltender to actually register an assist, but he was the first to make an intentional assist with his stick. In the 1917–18 season, Georges Vézina was credited with an assist after making a save with his leg pads, and the rebound went to a fellow forward.

Thompson's points percentage in a season of .875, recorded in the 1929–30 season, still remains a record. His 38 wins during that season was a Boston record that was eclipsed only in the 1982–83 season, by Pete Peeters (who won 40 of 62 games played); since then, no Bruins goaltender has had more than 37 wins in a season. Thompson is the all-time Bruins leader for games, wins, shutouts and goals-against average. Throughout his entire NHL career, Thompson accrued 81 shutouts, which is sixth all-time in NHL history, and was second to only George Hainsworth (who had 94) when Thompson retired. He also posted seven shutouts in the playoffs. He is fifth all-time in goals-against average, allowing on average only 2.08 per a 60-minute span. He led all goaltenders in regular season games played 10 times, and in regular season wins five times. 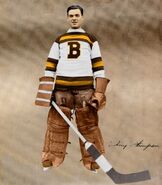 Thompson sporting the brown block "B" jersey introduced in 1932.

On January 28, 1934, Eddie Shore plays in his first game after the Bailey suspension. The Rangers Bun Cook scores on Tiny Thompson while Nels Stewart watches. 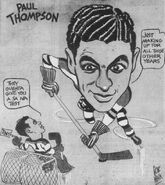 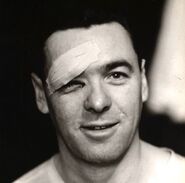 Thompson's eye injury changed the Bruins goaltending fortunes for the next decade, October 30, 1938. 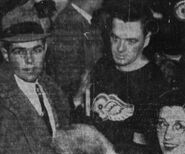