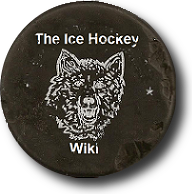 16 Years Old!!!
Your ultimate reference for everything ice hockey - a reference that you can edit!
Welcome to the ice hockey wiki. This project is now 16 years old and boasts 73,006 articles, a number that increases daily.
Come share your knowledge with us!

The Ice Hockey Wiki, in its aim to cover hockey as thoroughly as possible, pays special attention to minor professional, senior, junior, and university hockey, areas where information is often difficult to find on the internet. Our members have already gathered results and standings of hundreds of seasons of these hockey leagues and keep doing so, making IHW one of the most complete references in the domain.

A fundraising campaign has be launched in an effort to raise $3 million (US) to save the hockey team.

The team would raise over $3.1 million by the deadline.

The Ice Hockey Wiki community is a small but dedicated group of people who love ice hockey and are bound by a common goal: to build the most complete and accurate ice hockey encyclopedia ever written. We all have our very own specialty.

If you have any question about the wiki itself or about editing, you should ask one of our active administrators: Dtalbot or MarchandTriedToLickMe.

We have a discussion page, the Locker Room. Don't hesitate to drop by the place and ask questions, propose things or join ongoing discussions! Also check out the Community portal.