The Texas Stars are an American Hockey League team. They play in the suburban Austin town of Cedar Park, Texas [1][2]

The team is the top affiliate of the NHL Dallas Stars. In April 2008, the Iowa Stars announced that they would no longer affiliate with the Dallas Stars, and changed the team's name to Chops for the 2008-09 season.[3] For the 2008-09 season, Dallas made agreements to send their AHL prospects to four other teams, while a few remained with the Chops.[4] AHL teams which the Dallas Stars sent prospects to were the Hamilton Bulldogs, Manitoba Moose, Peoria Rivermen, and Grand Rapids Griffins.[5]

On April 28, 2009, the AHL granted the Texas Stars limited membership into the league, conditioned on the completed purchase of an existing AHL franchise within one year.[6][7] That condition was met on May 4, 2010, when the AHL approved the Texas Stars' ownership group's purchase of the Iowa Chops franchise, which had been suspended for the 2009-10 season.[8]

The team's inaugural season was a successful one. After finishing second in the West Division, the Stars swept Rockford in the first round of the playoffs, then claimed their first division championship by defeating Chicago four games to three. The Stars then won their first Robert W. Clarke Trophy by defeating Hamilton in another seven game series to become the Western Conference champions. The Stars eventually fell to Hershey in the 2010 Calder Cup Finals. 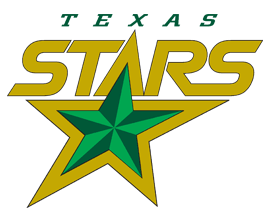 The Stars won the Calder Cup in 2014, defeating the St. John's IceCaps in the finals. After the season head coach Willie Desjardins resigned to accept the head coaching position with the Vancouver Canucks.[9] In July 2014 he was succeeded by Derek Laxdal, who won a Kelly Cup championship with the Stars' ECHL affiliate, the Idaho Steelheads, in 2007. Also during 2014 the Stars were purchased by Tom Gaglardi's ownership group, thus having the AHL affiliate under control of the parent club.

Texas Stars games are only broadcast on a local television station, which is KBVO, and are no longer broadcast on public radio in Austin. Owen Newkirk will provide the play-by-play in 2013–14.

On June 11, 2015, the Stars unveiled their new logo and color scheme to more closely match the parent club's identity.[10]