Ice Hockey Wiki
Register
Don't have an account?
Sign In
Advertisement
in: Born in 1929, Dead in 1970, Winnipeg Monarchs players,
and 19 more

During his career, Sawchuk won 501 games, 447 regular season and 54 playoff games, while recording 115 shutouts, 103 in the regular season and 12 in the playoffs Nicknamed "Uke" because of his Ukrainian ancestry, Sawchuk began his professional career at age 17, winning rookie-of-the-year honors in the United States Hockey League. He won rookie-of-the-year honors again after being promoted to the Indianapolis Capitals of the American Hockey League. Called up to the Detroit Red Wings of the National Hockey League for the 1950–51 season, he won the Calder Trophy as the league's top rookie, making him the first player to win the rookie-of-the-year award in three different professional leagues. He also was voted onto the first All-Star team, the equivalent to today's Vezina Trophy, since the Vezina at that time was given to the goalie(s) with the lowest goals against average.

In 1952, Sawchuk led the Detroit Red Wings to the Stanley Cup in the minimum eight games of two best-of-seven series during which he recorded four shutouts and allowed only five goals. In each of his first five years in the NHL, he led the league in wins and was named to the All-Star team. In 1954–55, he was traded to the Boston Bruins where he had difficulty adjusting. During the 1956–57 season he retired from the game, succumbing to severe stress and a bout with mononucleosis. However, the following year he returned to play after being traded back to Detroit. In return, the Red Wings sent a young forward named Johnny Bucyk to Boston in what is arguably one of the most one-sided trades in NHL history. Before the start of the 1964-65 season he was claimed by the Toronto Maple Leafs via the intraleague waiver draft, where he won another Vezina Trophy in 1964–65 and helped the Leafs win the 1966–67 Stanley Cup.

Sawchuk's ability to play despite painful injuries, a valuable asset in the days before goalies wore protective facemasks, was shown early in his life. A neglected injury he received while playing a friendly rugby match when he was 12 was discovered two years later to have been a broken arm that had healed poorly, leaving Sawchuk with one arm two inches shorter than the other. In his professional hockey career, Sawchuk played for more than a dozen years without a mask and received over 600 stitches to his face. However, he later wore a mask and valued its protective use.

He struggled with untreated clinical depression, a condition that often affected his conduct. An alcohol-induced shoving match with his New York Rangers teammate Ron Stewart left Sawchuk with internal injuries that led to his death a few weeks later in New York. It is not clear whether this incident was horseplay or a fight, but an investigation into possible involuntary manslaughter charges was undertaken, and no charges were filed against Stewart. In any event, Sawchuk suffered a lacerated liver and clots had to be surgically removed, but a clot stopped Sawchuk's heart on May 31, 1970. Sawchuk was buried in Mount Hope Cemetery in Pontiac, Michigan.

Sawchuk finished his hockey career with 447 wins, a record that stood for thirty years, and his career record of 103 shutouts remains unsurpassed among NHL goaltenders. (George Hainsworth holds the record for total major league shutouts with 104, 94 of them in the NHL.) In 1971, Sawchuk was posthumously elected to the Hockey Hall of Fame and awarded the Lester Patrick Trophy for his contribution to hockey in the United States. His number 1 has been retired by the Detroit Red Wings. The Terry Sawchuk Arena in his hometown of Winnipeg is named in his honour.

On November 11, the Detroit Red Wings were playing a home game against the Toronto Maple Leafs. Angry that Metro Prystai had been traded to the Chicago Blackhawks at the bequest of Leafs Conn Smythe in the name of league parity, the Wings were in a foul mood. Ted Lindsay fought with Leafs Jim Thomson and then coach King Clancy. The Leafs won 1-0 and as the Wings were leaving the ice, a hometown fan heckled Glen Skov. Skov, goalie Terry Sawchuk, Sid Abel and Lindsay scaled the wire mesh over the boards to get at the fan, with Lindsay punching the heckler in the eye. 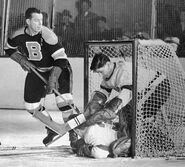 Terry Sawchuk congratulated after his first win as a Bruin, October 12, 1955.

Jean Béliveau scores one of three goals on Terry Sawchuk in 44 seconds on the power play, November 5, 1955.

Dave Keon moves in on Sawchuk. 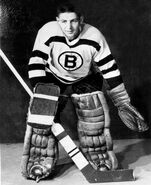 With the Boston Bruins.

With the Toronto Maple Leafs.

With the Los Angeles Kings. 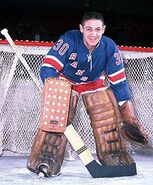 With the New York Rangers.