He played for his hometown Owen Sound Greys when they won their first Memorial Cup as Canadian junior champions in 1924. After two years of senior hockey with the Stratford Indians and the London Ravens Graham turned pro with the Chicago Black Hawks in 1926-27. He was sent down to the minors until 1929-30 when he returned to the Hawks. Graham was a regular for the Hawks through the 1932-33 season.

Starting in 1933 he played for five NHL teams over four seasons. He retired in 1938 after playing for the New Haven Eagles. 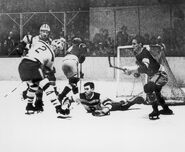 Retrieved from "https://icehockey.fandom.com/wiki/Ted_Graham?oldid=667722"
Community content is available under CC-BY-SA unless otherwise noted.