The Syracuse Crunch are an ice hockey team in the American Hockey League. They play in Syracuse, New York, USA at the War Memorial at Oncenter.

Other hockey teams that played in Syracuse:

The franchise originated in 1992 as the Hamilton Canucks, which were an affiliate of the NHL's Vancouver Canucks. The Canucks played in Hamilton, Ontario, for two seasons, before relocating to upstate New York in 1994. They were then renamed the 'Crunch' in a public vote of five names. Soon the team was among the most popular of the AHL, leading the league in sellouts in 1996-97 and 1997-98.[1] After the relocation from Hamilton was complete, the Crunch remained the AHL farm team of the Canucks until 2000 - with also a season hosting Pittsburgh Penguins players in 1997-98 - when it switched its NHL affiliation to the newly formed Columbus Blue Jackets, an affiliation it retained for a decade, before the Jackets switched their affiliation to the Springfield Falcons in 2010.[2] The Crunch then spent two seasons affiliated with the Anaheim Ducks before signing a multi-year affiliation deal with the Tampa Bay Lightning effective for the 2012–13 season.[3] In the first year of the new partnership, the team reached the 2013 Calder Cup Finals, losing to the Grand Rapids Griffins.[4]

The Crunch played the first outdoor game in AHL history on February 20, 2010, against the Binghamton Senators. The Mirabito Outdoor Classic took place at the Grandstand at the New York State Fairgrounds in Syracuse. The game set an AHL attendance record of 21,508. Syracuse won the game 2–1.

At the end of the 2012-13, Tyler Johnson was named league MVP. He was the first MVP in crunch history.

On November 22, 2014, the Syracuse Crunch set a new "United States Indoor Professional Hockey" attendance record by playing in front of 30,715 fans at the Carrier Dome for the "Toyota Frozen Dome Classic". Syracuse defeated the Utica Comets 2-1.

The Crunch raised a banner following a fan vote during the team's fifth season in honor of fan favorite #14 "Big Bad" John Badduke. It is not retired, as it would later be worn by former US Olympian Darby Hendrickson, Serge Aubin, Richard Panik and Justin Courtnall.

During the 2008–09 AHL season, the team temporarily reserved, but not retired, #7 as a tribute to Paul Newman after his death. This honors Reg Dunlop, the player-coach for the fictional Charlestown Chiefs, which Newman played in the movie Slap Shot that was filmed partially at Onondaga County War Memorial. Coincidentally, other scenes were filmed at Cambria County War Memorial Arena in Johnstown, Pennsylvania, the home ice of the Crunch's former ECHL affiliate, the Johnstown Chiefs. The banner was raised October 14 and was up for the entire season, but the number was not retired, as it was worn by Crunch player Artem Sergeev.

Owner Howard Dolgon came up with the superhero mascot Crunchman for the team's debut in 1994. In 2000, as the Crunch became an affiliate of the Columbus Blue Jackets, Crunchman was replaced with Al the Ice Gorilla. Al remained until 2012, when Dolgon found the new affiliation with Tampa Bay a good reason to return with Crunchman.[5] 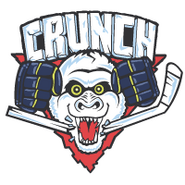 Three Syracuse Crunch season ticket holders dress as the Hanson Brothers from the movie Slap Shot for each and every Crunch home game. During a stoppages of play, if there is a man in the opposing penalty box, one of the three will get out of their seat when the theme to Bonanza begins and proceed to travel around the main row on the ice level and crash into the penalty box seemingly as a taunt to the other team.