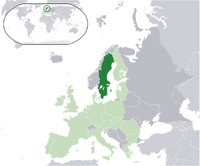 Sweden (officially called the Kingdom of Sweden), is a Nordic country on the Scandinavian Peninsula in Northern Europe, bordered by Finland and Norway. It has been a member of the European Union since 1 January 1995. There is a little over 9 million people living in Sweden, which capital is Stockholm.

Ice hockey is a very popular sport in Sweden, more or less equal with football (soccer) in term of spectator and practitioner popularity. The Swedish hockey pyramid is topped by the Swedish Hockey League, SHL, a league that exists since 1922, but only took its current name in 2013. It was previously called Elitserien. Second comes the HockeyAllsvenskan, usually simply referred to as the Allsvenskan, a name that has come and gone during the years in Swedish hockey to designate various competitions. The Allsvenskan as it is now, i.e. a true second division, was only implemented in 1999, as a league split in two 12 teams competitions, Norra (north) and Södra (south). Nowadays, the Allsvenskan is a single competition of 14 teams, as of 2009-10.

Ice hockey in Sweden wholy embraces the promotion and relegation system. The worst two teams from the Elitserien play the best four of the Allsvenskan at the end of the season in a league competition called the Kvalserien (qualification series). Likewise, the worst two teams from the Allsvenskan have to play in a similar competition, the Kvalserien til Allsvenskan, against the top Division 1 teams. Similar competitions exist for the promotion and relegation between the lower leagues.

History of hockey in Sweden

Sweden became a member of the IIHF in 1912. Sweden made its debut at the Olympics in Antwerp in 1920, finishing 4th. Sweden was named the host city of the European Championships in 1921 and won the event after that only one nation (Czechoslovakia) had showed up.

On the international level, Sweden is very competitive, continuously ranked in the elite of the world and part of the Big Seven. The Swedish National Team was created late in the 1920's. The team, nicknamed Tre Kronor ("three crowns", because of its logo) is highly regarded, and has several accomplishments justifying its reputation. Indeed, the team has won no less than eight Olympic medals, including two gold (1994 and 2006). Sweden also won eight World Championship editions (1953, 1957, 1962, 1987, 1991, 1992, 1998, 2006), as well as 18 silver medals and 15 bronze medals. Finally, the team ranked second at the 1984 Canada Cup.The Swedish U20, U18, Womens, and Womens U18 teams also participate in the world championships.