The Suncoast Suns were a minor professional team in St. Petersburg, Florida. They played in the Eastern Hockey League in the 1971-72 and 1972-73 seasons. This league folded in 1973 and split into the Southern Hockey League and the North American Hockey League.

The Suns went into the Southern League in 1973-74 but were not a success. Despite a local fundraising campaign that raised about $18,000 the team folded in December, 1973.

The Suns played in the Bayfront Arena. 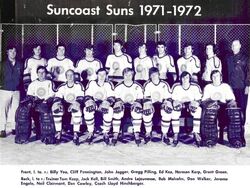 1971-72 Suncoast Suns
Add a photo to this gallery
Retrieved from "https://icehockey.fandom.com/wiki/Suncoast_Suns?oldid=289370"
Community content is available under CC-BY-SA unless otherwise noted.