The St. Thomas Stars are a Canadian junior ice hockey team based in St. Thomas, Ontario, Canada. They play in the Western division of the Greater Ontario Junior Hockey League.

The old Barons joined the troubled original Western Jr. "B" League in 1961. When the league became the Southern Ontario Junior A Hockey League in 1968, the Barons came with them and changed their name in 1970 to the Elgins. 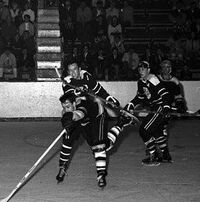 In 1969, the Barons won the Western Ontario Junior "A" Championship. As per their league's agreement with the Western Canada Hockey League, the Barons were shipped out to Flin Flon, Manitoba to face off against Bobby Clarke and the WCHL Champion Flin Flon Bombers is a best-of-7 series for National bragging rights. The Bombers won the first three games. The Barons forfeited game four, leaving during the second period and citing violent play by the Bombers—conceding the championship.

The Elgins folded in 1973 and were replaced by the Colonels, who formed the year before, the next season in the Central Junior C Hockey League. In 1976, the team was moved up to the shortlived "Southwestern Ontario Junior "B" Hockey League". When the Southwestern died, the Colonels jumped to the new "Western League" and changed their name to the Pests in 1980. As expected, the Pests was considered a horrible name and was changed to the Stars in 1984. The Stars are a consistent and strong team in the Western Ontario Jr B Hockey League, and compete to this day.