The St. John's IceCaps were a professional ice hockey team based in St. John's, Newfoundland and Labrador, Canada. They are members of the Atlantic Division of the Eastern Conference of the American Hockey League (AHL). The team was originally affiliated with the second incarnation of the Winnipeg Jets from 2011 to 2015. However, beginning with the 2015–16 AHL season, they were the top affiliate of the Montreal Canadiens of the National Hockey League (NHL) after the Jets relocated their franchise back to Manitoba and the Canadiens moving the former Hamilton Bulldogs franchise to St. John's. The IceCaps were also affiliated with the Brampton Beast of the ECHL.

The tenure as a Canadiens farm team was brief as the Canadiens confirmed that their AHL farm team will be based out of Laval, Quebec in the new arena that is scheduled to open in mid-2017. 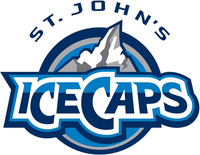 The team unveiled a special third jersey on January 15, 2016 to honour the 100th Anniversary of the Battle of the Somme at Beaumont-Hamel in which 733 men from Newfoundland and Labrador were killed or injured.  The logo is crested by a commemorative logo for the 100th anniversary  and the words "The Royal Newfoundland Regiment" with the dates "1916" and "2016".