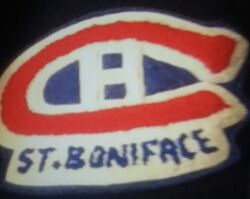 The St. Boniface Canadiens were a Canadian Junior A hockey team from St. Boniface, Manitoba. They were members of the Manitoba Junior Hockey League for 13 seasons. In 1951, a group headed by Larry Desjardins purchased the St. James Hockey Club's MJHL franchise. The team was affiliated with the Montreal Canadiens of the National Hockey League. Team colors were the same as the NHL Canadiens. Jack Perrin purchased the club in 57, and a year later ended the team's relationship with the NHL Canadiens. Instead, linked the Team with his Winnipeg Warriors of the Western Hockey League. In 59, Perrin affiliated all of his teams with the Boston Bruins of the NHL. In 64, the Canadiens were assigned the north area and were renamed the Winnnipeg Warriors.