The St. Benedict Bennies (formerly the St. Benedict Blazers) are a Women's Division III team in Minnesota Intercollegiate Athletic Conference representing the College of Saint Benedict in St. Joseph, Minnesota. The school is a sister institution to St. John's University located in Collegeville, Minnesota. In 2019 the Athletic teams at CSB were officially rebranded and changed from the "Blazers" to the "Bennies".

The team is based out of the Dave Torrey Arena in St. Cloud, Minnesota. Plans have been announced to build an all purpose athletic and recreation center on the campus that will include an ice rink for the hockey program. A redesign, renovation and expansion of Haehn Campus Center and Murray Hall will create the new facility. 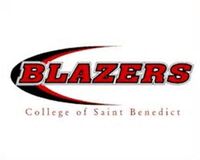 The program was established for the 1997-98 season.  The team played at the River Lakes Civic Arena in Richmond, Minnesota from 1997 to 2002 and moved into the new St. Cloud Municipal Athletic Complex in St. Cloud, Minnesota for the 2002-03 season.  The team would then later move to the Dave Torrey Arena in St Cloud.  The school is in the process of building a new arena as part of the expansion of the Haehn Campus Center and Murray Hall to become home to the team.

Retrieved from "https://icehockey.fandom.com/wiki/St._Benedict_Bennies_women%27s_ice_hockey?oldid=691715"
Community content is available under CC-BY-SA unless otherwise noted.