The St-Gabriel-de-Brandon Predateurs are a Junior "A" ice hockey team from Sainte-Agathe-des-Monts, Quebec, Canada. They are a part of the Quebec Junior AAA Hockey League.

The Sainte-Agathe Montagnards were added to the Quebec Junior AAA Hockey League for the 2008-09 season.

After the 2017-18 season the team announced the team would be renamed the Predateurs. 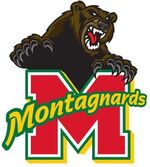 Retrieved from "https://icehockey.fandom.com/wiki/St-Gabriel-de-Brandon_Predateurs?oldid=679480"
Community content is available under CC-BY-SA unless otherwise noted.