The South Carolina Stingrays are a professional ice hockey team in the ECHL. They are based in the city of North Charleston, South Carolina. Since 2004, the team has been affiliated with the Washington Capitals of the National Hockey League and the Hershey Bears of the American Hockey League. The team developed a large fan base rapidly following its inception. During its first season (1993–94) the team boasted an average of 9,151 fans a game - one of the largest crowds in minor league hockey.[1] Currently, the Stingrays average approximately 5,000 fans per game.

The ECHL team began in 1993 with a management team which included Joseph Scanlon as president/CEO and retired NHL player Rick Vaive as head coach. The team was originally to be designated the South Carolina Sharks, but eventually settled on the Stingrays name to avoid a copyright dispute with the NHL's San Jose Sharks.[2]

Late 1994 saw a power struggle for control of the team arise. Scanlon filed a lawsuit in a Canadian court in an attempt to wrest control of the team from its ownership group, and found himself replaced as president and CEO by retired NHL Hall of Famer Marcel Dionne in December of that year. Dionne was accused of assault by Lynn Bernstein, an ally of Scanlon, over a dispute regarding the removal of advertising signs at the Coliseum, but was later acquitted.[3]

In 1995, following dismissal of Scanlon's lawsuit, the ECHL Board of Governors ended the power struggle when it approved the sale of the franchise from its Canadian ownership group to a local investment group led by Edwin Pearlstine, owner of Pearlstine Distribution, the local Budweiser distributor. The group also included Jerry and Anita Zucker, Harvey Nathan and Lynn Bernstein (owners of local restaurant Nathan's Deli), and the Greenwald family of Seabrook Island. Dionne remained as the franchise's president and CEO.[4]

In early 1995, the team was offered an expansion spot by the AHL, along with Charlotte, Greensboro, and Hamptons Roads. However, team management decided at that time to remain in the ECHL, citing a desire to retain the level of affordability for the team's fans.[5] The other three franchises have since accepted AHL offers, becoming the Charlotte Checkers, Carolina Monarchs, and Norfolk Admirals, respectively.

Later that year, Dionne left the Stingrays organization, stating that he wished to attend to personal matters. In addition to his coaching duties, Vaive was named Director of Hockey Operations, giving him more control over personnel decisions.[6]

The Stingrays flirted with playoff success from 1993 to 1996, but it was not until 1997 that they won not only the ECHL championship Kelly Cup (defeating the Louisiana IceGators), but were also awarded the Brabham Cup for being the regular season points leader, becoming the first ECHL team and one of three overall to win both a regular season and postseason championship in the same year. The Alaska Aces (2006) and the Cincinnati Cyclones (2008) later accomplished this feat.

This early success, however, was marred by allegations from ECHL management that the Stingrays, in collusion with the city of North Charleston, violated the ECHL's salary cap by funneling money through a city-run youth hockey program to provide payouts to players. Following two months of investigation by the league, the Stingrays were assessed a $50,000 fine, and head coach and general manager Rick Vaive was handed down a six-game suspension for the start of the 1997–98 season. Further review by the Internal Revenue Service determined that no state or federal tax laws were broken. The incident sparked a re-evaluation by the ECHL of the teams' salary caps.[7]

After failing to advance to the first round of the ECHL playoffs the next season by losing a "play-in" game in the 2001–02 season to the Florida Everblades in their practice facility (a concert at the Coliseum forced the move), Adduono was released from his contract and was replaced by Fitzsimmons.[8] Jared Bednar, another longtime Stingray, was made assistant coach later.

Despite a long-standing association with the Buffalo Sabres, the Stingrays broke away just before the 2001–02 season, and played three seasons as an independent team. For the 2004–05 season, the team agreed to an affiliation with the Washington Capitals, which they have maintained to present day.[9]

After failing to qualify for the ECHL playoffs for the only time in franchise history during the 2006–07 season[10], Fitzsimmons resigned, and was assigned by their parent Capitals as a scout. Bednar took over as head coach, with Cail MacLean, who had been the captain for the Stingrays, as a part-time assistant while completing his studies at The Citadel. Bednar's two seasons were highly successful. In the 2007–08 season, the Stingrays advanced to the American Conference finals, losing 4–1 to the Cincinnati Cyclones in a suspense-filled series that saw 3 games (including the final) decided in overtime.

The Stingrays built on this momentum in the 2008–09 season, sweeping Cincinnati 4–0 in the conference finals and winning the Kelly Cup on the road in the culmination of a dramatic 4–3 series with the Alaska Aces. Bednar became a hot coaching prospect overnight. He resigned shortly thereafter, joining the Calgary Flames' system in Abbotsford as assistant coach, and later earned his first AHL head coaching assignment with the St. Louis Blues' farm club in Peoria for 2010–11. MacLean was named head coach, with the assistant coach position becoming vacant.

The Stingrays are three-time ECHL Kelly Cup Champions. The 2009 championship, won following a seven-game final against the Alaska Aces, along with championships in 1997 and 2001, tie them with the Hampton Roads Admirals for the most Kelly/Riley Cup wins in league history. Alongside the Idaho Steelheads, Cincinnati Cyclones and the Toledo Walleye (then the Toledo Storm), they are one of only four active ECHL teams to win multiple league championships.

The Stingrays management and ownership have shown a strong loyalty to their players and staff. Since Rick Adduono (1998), each Stingrays head coach has been the team's previous assistant (and a former Stingrays player) -- initially Jason Fitzsimmons, then Jared Bednar, and currently Cail MacLean. Rob Concannon (named team president in 2010) played on the 1997 Kelly Cup team.

Building on their championship success, many players on the 2009 Kelly Cup team were called up to the American Hockey League during the 2009–10 season. Seven players from the 2009 team played in the 2010 Calder Cup Championship - six for the victorious Hershey Bears, and one for the runner-up Texas Stars. To date, 22 former Stingrays have played in the National Hockey League.

In August 2010, the Stingrays announced that former Stingrays forward Spencer Carbery had been named the team's assistant coach. 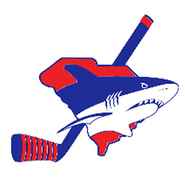 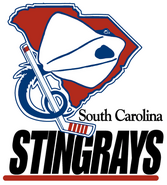 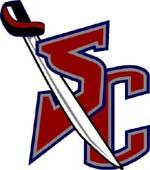 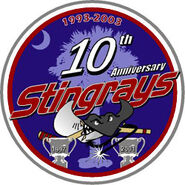 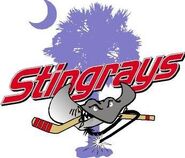 Stingrays former secondary, used during affiliation with the Washington Capitals. Based on the 10th anniversary logo design. Used 2004–2008.

Stingrays primary, a stylized representation of a stingray in alternating team colors. Currently in use. 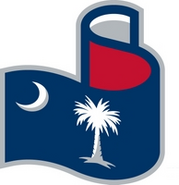 Stingrays secondary, a stylized version of the state flag, which appeared on the original jersey. Currently in use.

Stingrays tertiary, a reflection of the Arthur Ravenel, Jr. Bridge. Currently in use.

The team's primary logo has evolved over the years. Beginning as a realistic rendition of a stingray, it transitioned through a cartoon-style representation before settling on the stylized version used today. The state flag of South Carolina was originally used as the secondary logo (worn on the jersey shoulders). It has since been replaced by a variety of logos representing team affiliation, anniversary celebrations, and team championships. The current secondary logo (worn on home jerseys) returns to its origins as a rendition of the state flag, while the tertiary logo (worn on away jerseys) gives tribute to the Charleston area with its representation of the Ravenel Bridge.

The organization's mascot (from its inception in 1993 to present day) is Cool Ray, a stingray that currently resembles the previous Stingrays logo used from 2000–2008. Alongside the players, Cool Ray serves as the organization's ambassador to the local community, often appearing at local schools, athletic competitions and charity events. Cool Ray also provides entertainment and comic relief on ice and in the stands during games, and serves as the Stingrays' Kids Club mascot.

Additional mascots have included Little Puck, an anthropomorphic hockey puck who partnered with Cool Ray from 1993 to 2008, and Excalibear, the Carolina Ice Palace's mascot, who joined Cool Ray for the 2010–2011 season.

The Stingrays are covered by multiple media outlets. The Post and Courier provides newspaper coverage for the team. The team was covered by sports reporters Keith Namm and Gene Sapakoff from 1993 to 1997. Andrew Miller currently reports on the Stingrays and also authors a blog entitled "Rays the Roof," where he provides opinion pieces on the team's performance and transactions.

Television coverage of Stingrays games is provided over the internet on a pay-per-view basis by B2 Networks, a subsidiary of America One Broadcasting.

Play-by-play radio coverage of the Stingrays is handled by Joseph Zakrzewski, the organization's media specialist and broadcaster, who joined the Stingrays in 2009. This coverage is available over the internet via the team's website, and on the air via the following AM radio stations: WTMZ 910 AM (ESPN Radio), WJKB 950 AM, WQSC 1340 AM, and WQNT 1450 AM (Fox Sports Radio).

The Stingrays maintain a strong online presence, utilizing social media outlets such as Facebook and Twitter to engage with fans. Video clips of team commercials and interviews are made available via "Stingrays TV," the Stingrays' YouTube channel.

The crowning event of the Stingrays season is the annual "Pink in the Rink" night, supporting Susan G. Komen for the Cure and the fight against breast cancer. Proceeds from ticket sales, vendor tables, and live and silent auctions featuring sports memorabilia including the actual game-used hockey sticks and jerseys were presented to the Lowcountry chapter of Susan G. Komen for the Cure. Pink in the Rink 2009 raised over $20,000, while the 2010 event raised over $40,000.

Stingrays in the NHL

This is a partial list of the last five Stingrays players to advance to the NHL. For the complete list of players and staff, see List of South Carolina Stingrays alumni in the NHL.

12 - Mark Bavis, who played from 1994–96 when the Stingrays were an affiliate of the Buffalo Sabres. Bavis, by then a Los Angeles Kings scout, was killed along with Kings Director of Professional Scouting Garnet Bailey on United Airlines Flight 175 when Al-Qaeda terrorists hijacked the airliner, and steered it towards the World Trade Center on September 11, 2001. The Stingrays retired his jersey before the start of the 2001–02 season.

14 - David Seitz, who played from 1996–2004 and was a popular forward on the franchise with team records in goals, assists, and points, including over 200 goals and 500 points overall, fifth on the ECHL's all-time assists list, and two ECHL Kelly Cups. Seitz's retirement, caused by an ECHL restriction on experienced players on a roster after the Stingrays signed players for a road trip, sent shockwaves through the community.

24 - Brett Marietti, a popular player and former captain, retired after the 2002–03 season. Team management promptly retired his jersey in 2003. Marietti's tenure as captain ranks among the longest in ECHL history for a player to captain a single team.