Green started out playing hockey for local senior teams in his hometown of Sudbury from 1914-16. He joined the Canadian Army in 1916 and played a season for the Hamilton 227th Battalion in the Ontario Hockey Association's 1916-17 OHA Senior Season.

He returned from World War I in time to play for the Hamilton Tigers in the 1918-19 OHA Senior Season and to win the Allan Cup. He then joined the senior Sudbury Wolves for four seasons.

He played for the Hamilton Tigers in 1923-24 and 1924-25. Shorty was the captain of the Tigers when they went on strike in 1925 during the playoffs for more money. It was the first players strike in NHL history.

Green retired in 1927 (except for playing five games over three seasons until 1932).

He was inducted into the Hockey Hall of Fame in 1962. 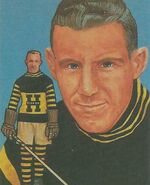 Shorty Green with the Hamilton Tigers.

Shorty Green scores first goal at MSG on Herb Rheaume.
Add a photo to this gallery

Retrieved from "https://icehockey.fandom.com/wiki/Shorty_Green?oldid=672125"
Community content is available under CC-BY-SA unless otherwise noted.