The Senior Intercollegiate League was set up quickly in December, 1945, in Ontario and Quebec. It included four universities that were outside the Canadian Intercollegiate Athletic Union - Loyola College and Sir George Williams University in Montreal, St Patrick's College in Ottawa and Laval University in Quebec City.

The league was rather hurriedly set up in December, 1945. The schools had not played inter-university hockey for the last six years because of World War II.

The league only played the one season, 1945-46. It was not a financial success. In 1950 a new league, the Ottawa St Lawrence Conference, was set up.

A planned final game between Loyola College and St Patrick's College was cancelled after there was a conflict in Ottawa with a Quebec Senior Hockey League playoff game. 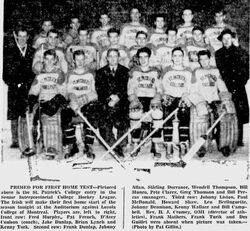 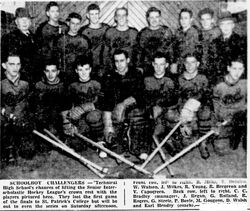 Ottawa Technical High School
Add a photo to this gallery
|

Retrieved from "https://icehockey.fandom.com/wiki/Senior_Intercollegiate_League?oldid=644514"
Community content is available under CC-BY-SA unless otherwise noted.