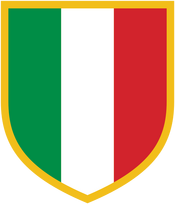 The Scudetto (plural: Scudetti) is the name given to a small shield depicting the Italian flag (Il Tricolore). This shield is used in ice hockey (as well as in various other sports in Italy) to display a title of Italian Champion (in other words, champion of the Serie A playoffs); it is also used to refer to that title (e.g. "the team won its second Scudetto in 2010"). This shield is usually worn by the champions on their jerseys following the capture of the title. The practice originates from football (soccer) and dates back to 1924, when Genoa CFC became the first Italian team to wear a Scudetto on its uniform following its eighth league title. The first hockey club to win a Scudetto was HC Milano in 1924.

When teams become particularly succesful and win a tenth Scudetto, they are allowed to commemorate it by using a five-tips golden star to replace the ten Scudetti. This star is always displayed at the left of any subsequent Scudetto shields. This tradition was started in 1958 when Juventus won its tenth title. In ice hockey, HC Bolzano and SG Cortina are the only active teams to have earned one. HC Milano also earned one, but no longer exists today.

Retrieved from "https://icehockey.fandom.com/wiki/Scudetto?oldid=155857"
Community content is available under CC-BY-SA unless otherwise noted.