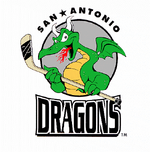 The San Antonio Dragons were a minor league professional ice hockey team in the International Hockey League for two seasons in 1996–97 and 1997–98. The Dragons were based in San Antonio, Texas and played at the Freeman Coliseum and occasionally the Alamodome.

The franchise was previously known as the Peoria Rivermen. For the first month of the 1996–97 season, the Dragons wore all white (home) and all black (road) jerseys because the new jersey designs had not come in yet. The team never drew many fans, competing directly with the established San Antonio Iguanas for attendance, and folded after two seasons due to financial problems.

Retrieved from "https://icehockey.fandom.com/wiki/San_Antonio_Dragons?oldid=71037"
Community content is available under CC-BY-SA unless otherwise noted.