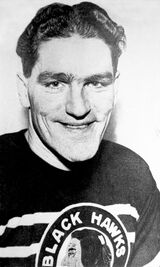 Note: Brayshaw became ill after the accidental death of his son, so Doctors ordered him to rest. He acted as an adviser for balance of Memorial Cup Playoffs. The Oil Kings won the west, but were swept in the Canada Final.

Retrieved from "https://icehockey.fandom.com/wiki/Russ_Brayshaw?oldid=567733"
Community content is available under CC-BY-SA unless otherwise noted.