Ice Hockey Wiki
Register
Don't have an account?
Sign In
Advertisement
in: Born in 1914, Dead in 1994, Winnipeg Monarchs players,
and 10 more 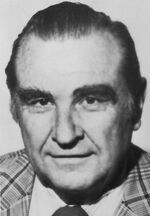 During a career than spanned more than four decades in coaching, managing, team ownership, and promotion, Rudy Pilous was a success everywhere he worked.

Pilous played with the junior Portage Terriers, who were captained by future NHL star Bryan Hextall in 1933-34. Then moved up to the senior ranks with the Selkirk Fishermen and Nelson Maple Leafs of the West Kootenay League. Also spent time with the Richmond Hawks in the England. The New York Rangers invited him to attend training camp in 1937 and after was assigned to the Blueshirts' top farm team, the New York Rovers.

Pilous never shied away from the truth. After requesting an honest opinion about his NHL potential from Rangers' bench boss Frank Boucher, was told he lacked big league speed. He next moved to St. Catharines to play on the senior team. After three full seasons in the OHA, he spent part of the 1941-42 season out of hockey, was itching to return to the game. After seeing the excitement generated by the Memorial Cup match up between Oshawa Generals and Winnipeg Monarchs at Maple Leafs Gardens, Pilous sought a junior franchise for St. Catharines. After much lobbying for league approval and investors, he was successful in putting the Garden City on the map.

Pilous returned to pro hockey in 1946 as a scout and assistant with the Buffalo Bisons of the American Hockey League. He then moved to Houston and turned around the fortunes of its United States Hockey League team, winning the championship in 1947-48. He was gaining a reputation as a trouble-shooter. His next accomplishment was taking the San Diego Skyhawks of the Pacific Coast League from last place to the league crown in 1949.

After his foray into minor pro hockey, Pilous returned to St. Catharines where there was a solid base of talent and in 1954 won the Memorial Cup with the TeePees. He was part owner as well as manager and was very content when the opportunity to coach in the NHL presented itself. The parent Chicago Black Hawks were in need of a competent individual to coach their improved team and take it to the next level in the late 1950s. Pilous was up to the challenge, guiding the Hawks to the Stanley Cup championship in 1961. All the while still managing the junior outfit, which he purchased, to the Memorial Cup championship in 1960. This dual success didn't last long as he sold the TeePees in 1961 and the Hawks opted to replace him with Billy Reay in 1963.

Pilous next moved back into minor pro hockey after he was hired by Punch Imlach to coach the Maple Leafs' affiliate Denver Invaders in the Western Hockey League, which transferred to Victoria the following season. He soon tired of the strife existing between Stafford Smythe and Imlach, and joined the Detroit Red Wings' junior team in Hamilton. In 1966, he was hired by the NHL expansion Oakland Seals as their first coach and general manager. The Seals' ownership was not patient and he was removed before they started playing in the NHL.

Pilous returned to Denver and helped start their new expansion team in the WHL. He coached and managed the Spurs for three seasons. Then he went home to Manitoba and worked with the junior Wheat Kings in Brandon. Where he was contacted by former Black Hawk Bobby Hull, who wanted an experienced person to coach the Winnipeg Jets of the new World Hockey Association. After being elevated to general manager, Pilous built a team that won the Avco Cup in 1976, 1978 and 1979. He left the Jets after John Ferguson was hired late in 1978 and joined the Detroit Red Wings as a scout. Pilous later scouted for Los Angeles and managed Toronto AHL farm team St. Catharines Saints from 1983 to 1986. He also coached in the popular Original Six oldtimers' circuit.