Donald Ross Brooks (born October 17, 1937 in Toronto, Ontario, Canada) is a former professional ice hockey Goaltender who played three seasons with the Boston Bruins of the National Hockey League. He is notable for not making his NHL debut until the age of 36, one of the oldest rookies in professional hockey history.

He started out in Junior "B" with the Bruins' farm team the Lakeshore Bruins in Toronto. He then played Junior "A" with the Barrie Flyers.

Brooks had a long minor league career which included seven seasons for the Providence Reds of the American Hockey League, and shared the award for lowest goals against average in the AHL in 1972. However, in the 1972-73 season, the Bruins, who owned his rights, lost several goaltenders. Top prospect Dan Bouchard was claimed in the 1972 NHL Expansion Draft and star Gerry Cheevers to the WHA. This opened the door to Brooks' recall as the backup goaltender to veteran Eddie Johnston.

Brooks played for the Bruins from 1972 until 1975, after which, upon the return of Cheevers to the organization, he played a single season for the Bruins' AHL Rochester Americans farm team before retiring. Playing for a powerhouse team that regularly finished around the top of the league standings, he compiled a career record of 37 wins, and only 7 losses and 6 ties with a goals against average of 2.63. His career winning percentage is one of the highest recorded for goalies with 50 or more decisions.

After his retirement Brooks was a longtime executive for the Bruins' farm team in Providence, leaving that post in 2000. 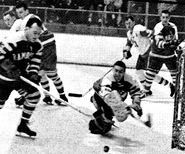