Ellis was signed by the Leafs and played junior hockey with the Toronto Marlboros of the Ontario Hockey Association from 1961–1964. He played on the team that won the Memorial Cup in 1964.

In 1963-64 the Leafs wanted to bring him up to the NHL for a five game trial, which was the maximum pro games allowed to an amateur. Ellis refused, saying that would have cost him his eligiblity for an NCAA hockey scholarship. He wanted that option open to him.

Ellis became a full-time Leaf in 1964–65 and played 11 seasons to 1974–75, winning the Stanley Cup in 1967. He was also a member of Team Canada at the 1972 Summit Series. Ellis retired at age 30 during training camp in 1975, coming off the most productive season of his career with 61 points. He said he no longer had the desire to play and denied that his decision had anything to do with being passed over as team captain in favour of Darryl Sittler a month earlier. In 1977, Ellis came out of retirement to play for Canada at the world hockey championships and then decided to resume his NHL career with the Leafs in 1977–78.

Punch Imlach was hired to run the Leafs for the 1979–80 season and didn't feel that Ellis was worth the money he was being paid. He offered to buy out Ellis's contract at the end of the season, but the two couldn't reach an agreement. Despite objections from new coach Mike Nykoluk, Imlach put Ellis on waivers during the 1980–81 season and gave him an ultimatum: retire or be sent to the minor leagues. The 36-year-old Ellis chose to retire. He had played 1,034 career NHL games scoring 332 goals and 308 assists for 640 points.

After his life in hockey, Ellis opened a sporting goods store but the stresses of life after hockey took its toll. In 1986 a bout with clinical depression began. He would later go public with his story by writing a book with Kevin Shea titled Over The Boards: The Ron Ellis Story, published in 2002. Today, he is a speaker on the importance of diagnosing and treating clinical depression. As of 2006, Ellis is director of public affairs for the Hockey Hall of Fame in Toronto.

Ellis earned an unusual tribute in 1968 when former Leafs star Ace Bailey—then working as a timekeeper at Maple Leaf Gardens—declared that he admired Ellis so much, he wanted the team to give his retired #6 to Ellis. Bailey's number had been retired following his career-ending injury in 1933. Ellis, who had been wearing #8, changed to #6 for the rest of his career, after which the number was re-retired. 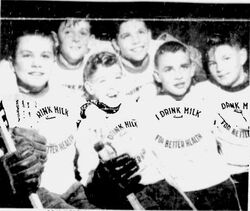 Ellis at left in the Ottawa Cradle League in 1957.
Add a photo to this gallery

Retrieved from "https://icehockey.fandom.com/wiki/Ron_Ellis?oldid=418177"
Community content is available under CC-BY-SA unless otherwise noted.