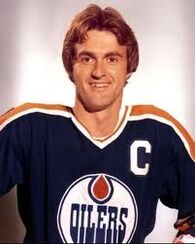 scored 150 goals in only 20 games in 1968-69. ... led Minnedosa to the Provincial Bantam A championship. ... started his junior career with the Dauphin Kings of the MJHL as a fifteen year old. ... nearly won the scoring race, but tied for most goals. ... Dauphin won the league championship. ... spent the next four years with the Brandon Wheat Kings of the WCHL. ... led the team in goals, assists, and points as a rookie. ... actually led the team in goals all 4 years, establishing league records in the last two. ... led the team in points in his last two seasons, winning the league scoring championship in 1974. ... also named league MVP and All-Star. ... became the WCHL career leader in goals with 261, and points with 470. ... joined the WHA's Vancouver Blazers in 1974. ... spent a year with the Blazers before team relocated to Calgary. ... spent two seasons with the Cowboys, then a three year run with the Edmonton Oilers. ... set WHA record for goals in one playoff game with five. ... his NHL debut was also first game in Edmonton Oilers' NHL history, and he served as the Oilers first NHL captain. ... one of only two players in NHL history (with Winnipeg's Lars-Erik Sjoberg) to play first NHL game as a team captain. ... in March of that season he was traded to the Quebec Nordiques, for former junior teammate Ron Low. ... after playing just four contests with the Nordiques in 1980-81, took his skills to Italy. ... that season he scored a league-leading 78 goals and 128 points in just 30 games. ... his final three seasons were spent there playing for HC Bolzano. ... continued to coach & manage in Italty. ... started Optima World Sports Agency along with another ex-Oiler, Brett Callighen, and Gary Seigo. ... Optima finds European teams for North American players and coaches who've been in the National Hockey League or American Hockey League. ... co-authored book called Mastering Inline Hockey with Callighen. ... played in the 2003 Heritage Classic in Edmonton, along with the other Oiler legends against the Montreal Canadiens.