Rick George MacLeish (January 3, 1950 – May 30, 2016) was a Canadian professional player. He played in the National Hockey League (NHL) with the Philadelphia Flyers, Hartford Whalers, Pittsburgh Penguins, and Detroit Red Wings. He won two Stanley Cups with the Flyers in 1974 and 1975.

MacLeish was drafted 4th overall by the Boston Bruins in the 1970 NHL Amateur Draft after playing the majority of his junior career with the Peterborough Petes. After spending the first half of his first professional season with the Oklahoma City Blazers, MacLeish was involved in a three-way deal which sent him, Bruce Gamble, Dan Schock, and a 1st round pick to the Philadelphia Flyers, Bernie Parent and a 2nd round pick to the Toronto Maple Leafs, and Mike Walton to Boston. MacLeish spent the rest of the 1970–71 season with the Flyers, scoring two goals and four assists in 26 games. He also added a goal in four playoff games. After splitting the 1971–72 season between the Flyers and Richmond Robins, MacLeish scored 50 goals and 50 assists during the 1972–73 season.

In 1981 he was traded ot the Hartford Whalers. After playing some games with the Pittsburgh Penguins and the Detroit Red Wings, MacLeish retired in 1984. 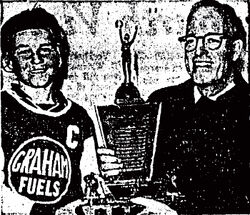 MacLeish receives a trophy in 1962.