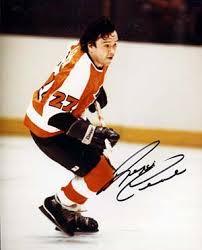 that all changed in the May of 1974. ... only days after Philadelphia won the Stanley Cup, Flyers GM Keith Allen asked Bobby Clarke, his opinion about acquiring Reggie. … then he was a Flyer, only 5 days after they won the cup. ... teamed with Clarke and Bill Barber to score 45 goals. ... scored another eight goals in the playoffs. ... helping the Flyers repeat as Cup winners. ... in 1975-76, he exploded, scoring a league leading 61 goals. ... saved his best for the post-season, scoring 19 in only 16 games, a league record. ... scored 5 goals in one playoff game, tying a NHL record. ... the Flyers, however, would fall short, losing the Stanley Cup final to Montreal. ... received the Conn Smythe Trophy as playoff MVP. ... 1975-76, was a dream season for Leach. ... he set multiply NHL and team records. ... became second player in Philadelphia Flyers history to score 50 goals in a season when he got No. 50 on March 14, 1976, vs. Atlanta. ... became the first Philadelphia player to score 60 goals in a season when he scored No. 60 in April 1, 1976, game at vs. Washington. ... also became only the second player in NHL history to reach 60-goal mark, joining Phil Esposito. ... with linemates Clarke and Barber set a NHL record for most goals by a line. ... set NHL record for combined (regular season & playoff) goals with 80. ... slipped to 32, 24 and 34 goals respectively over the next three seasons.

Retrieved from "https://icehockey.fandom.com/wiki/Reggie_Leach?oldid=385249"
Community content is available under CC-BY-SA unless otherwise noted.