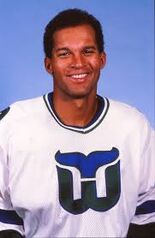 a scrappy competitor who used his size and scoring ability to good effect during his 595-game NHL career. He recorded four 20-goal seasons and set up his linemates for many goals through his hard work in the corners. ... in junior, was a scoring star with the Flin Flon Bombers and Edmonton Oil Kings of the WHL. ... rated in The Hockey News draft preview issue as No. 9 prospect among players born in 1959 for the 1979 NHL draft. ... after scoring 54 goals in 1978-79, he was drafted by the Hartford Whalers. ... turned pro in 1979-80, playing mostly in the AHL for three years before earning a full time slot on the Whalers in 1982-83. ... made NHL debut March 21, 1980 against Philadelphia in Hartford. ... scored first NHL goal in second NHL game, on a breakaway from center ice at Montreal Forum. ... famous in Hartford for throwing pucks into stands as he exited pre-game skate for home games. ... won Hartford Keyes Award (Unsung Hero) 1982-83. ... scored 1,000th goal in Hartford/Carolina franchise history on Jan. 13, 1985, vs. Philadelphia. ... played on Hartford's off-season charity softball team. ... active in charitable causes during his playing days in Hartford, including work with Connecticut Girl Scouts and local inner-city kids. ... left Hartford with franchise record (since broken) for games played in NHL (331). ... last player from Whalers' first NHL draft to play continuously for the organization. ... really struggled after being traded from Hartford to Winnipeg. ... utilized as a scorer in Hartford, Winnipeg miscast him as a power forward. ... also the pressure of being traded for popular Dave Babych also weighed heavily on him. ... played decently for Winnipeg but his goal production dropped and he began to feel the pressure from the home crowd. ... traded to Boston in December 1988. ... saw limited action in Boston and after playing a season in the AHL, retired in 1990. ... returned to Winnipeg after his retirement and went into real estate business. ... started coaching junior in the MJHL in 2004. ... joined BIG FM radio as a color commentator on MJHL hockey broadcasts for the Selkirk Steelers in 2007 for parts of 2 seasons. ... was an analyst for TSN 1290 for their NHL Winnipeg Jets radio broadcasts. ...