In 1936 he was a member of the Canadian ice hockey team, which won the silver medal.

He had played senior hockey for the McGill Redmen and the Montreal Royals. He won the Maurice Forget Trophy in 1928, 1930, and 1931 and the Kenneth Stewart Trophy in 1934. 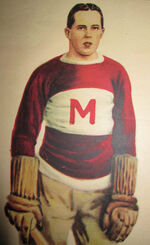 Retrieved from "https://icehockey.fandom.com/wiki/Ralph_St._Germain?oldid=643576"
Community content is available under CC-BY-SA unless otherwise noted.