The first traces of women's hockey in Canada date back to the 1890s when it is played at the university level. The University of Toronto and Queen's University in Kingston, Ontario were two of the first Canadian universities to field women’s hockey teams.

Elizabeth Graham would play hockey for Queen's University and is credited as being the first goaltender ever to wear a mask for protection. She used the mask in 1927, and the use of the mask was in the Montreal Daily Star. She actually wore a fencing mask and the speculation is that she had used the mask as a means of protecting dental work that was recently performed.[1]

During the 1960’s, Cookie Cartwright and a group of dedicated students revived the women’s ice hockey program at Queen's University. Cartwright and the Golden Gaels would go on to capture the first women's university championship. [2]

After 32 long years, the Queen's women's hockey team captured their first OUA Championship in 2010-11. The team won all five of their playoff games in overtime, knocking off nationally-ranked opponents Windsor in the Quarter-final, Wilfrid Laurier in the Semifinal and Guelph in the Final. Game 1 of the OUA Championship series was historic in its own right for the Gaels as the team won the longest collegiate hockey game in history, a six-overtime marathon. The game finally game to an end after 107 minutes and 14 seconds of overtime when Morgan McHaffie banged home a rebound past Guelph goaltender Danielle Skoufranis. Queen's goaltender Mel Dodd-Moher made 66 saves for the win.[3]

The team moved on to their first CIS Championship following the OUA playoffs where the Gaels defeated the defending champion Alberta Pandas and the host Wilfrid Laurier Golden Hawks to win the bronze medal.[4] 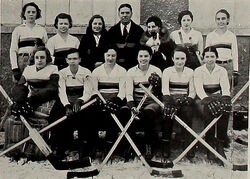 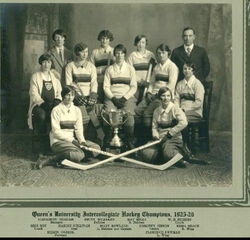 Retrieved from "https://icehockey.fandom.com/wiki/Queens_Golden_Gaels_women%27s_ice_hockey?oldid=674156"
Community content is available under CC-BY-SA unless otherwise noted.