The Quebec Citadelles were a junior, then a minor professional team.

The junior team started play in the Junior Amateur Hockey Association in 1947-48. and then continued on under its new name the Quebec Junior Hockey League until 1953.

In 1952-53 the Quebec Amateur Hockey Association (QAHA) was suspended by the Canadian Amateur Hockey Association (CAHA). In the league final, the Citadelles forfeited the series over a dispute about their coach and his tactics, The Citadelles then jumped to the CAHA Memorial Cup playoffs, where they lost in the 1952-53 Eastern Canada Memorial Cup Playoffs. 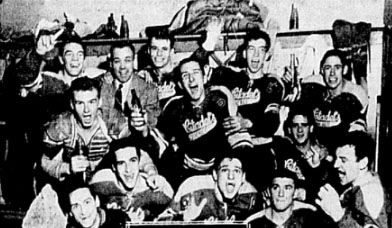 Partly as a result of this dispute, the Citadelles jumped to the Ontario Hockey Association in 1953-54 but they folded in December and amalgamated with the Quebec Frontenacs.

The team was resurrected in 1960 in the Provincial Junior League. They made it to the Memorial Cup playoffs in 1962 because of their first place finiah in the league. They lost the league playoff final later that season.

An American Hockey League team was started in 1999. It was a Montreal Canadiens farm team, This team lasted for only three seasons before the Canadiens moved the team to Hamilton.