The Quebec Castors or Quebec Beavers were a professional ice hockey team based in Quebec, Quebec from 1926 to 1928 and from 1932 to 1935. They were members of the Canadian-American Hockey League.

The team first played in the 1926–27 season. They played one further season in 1927–28, before being sold to become the Newark Bulldogs. The Bulldogs only lasted one season.

A new Castors team was formed in the new Eastern Canada Hockey Association. When the league folded this team entered the Canadian-American League. The revived team played a further three seasons before disbanding for good in 1935. The owner, Lucien Garneau, transferred his CAHL franchise to Springfield, Massachusetts and used it to form the second Springfield Indians. 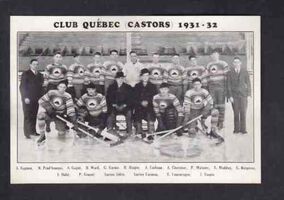 1931-32 Quebec Castors
Add a photo to this gallery

The Quebec Castors were also a junior team.

In each of these seasons the Castors advanced to the Quebec Junior Playoffs and lost the provincial final.

Retrieved from "https://icehockey.fandom.com/wiki/Quebec_Castors?oldid=613423"
Community content is available under CC-BY-SA unless otherwise noted.