The Quebec Bulldogs were a men's senior-level ice hockey team officially known as the Quebec Athletics. Their recorded play goes back as far as the Amateur Hockey Association of Canada (AHAC) in 1889, although a Quebec Hockey Club is known to have played in tournaments prior to that date. The club continued as an amateur team through various leagues, eventually becoming professional in 1908, and eventually playing in the National Hockey League. The Bulldog name was given by the media and was so popular with the fans a Bulldog mascot was created but was never officially changed until the team moved to Hamilton, Ontario in 1920 and became the Tigers.

The Bulldogs arrived on the hockey scene in 1888 as part of the Amateur Hockey Association of Canada (AHAC). They also played in the CAHL and ECAHA. Over that time, Quebec was not very successful. Quebec won one championship, that of the CAHL in 1904.

In late 1909, Quebec became a founding member of the Canadian Hockey Association (CHA) in 1909. The CHA, however, would only last one month before being absorbed into the much more powerful National Hockey Association (NHA). Unsure if they wanted to join the NHA, the Bulldogs sat out the inaugural 1910 season. The following season, 1910-11, the Bulldogs took over the defunct Cobalt Silver Kings franchise, but had a rough initiation, finishing dead last with 4 wins and 12 losses in a 16 game season. On a positive note, and a sign of things to come, Jack McDonald scored 14 goals and Tommy Dunderdale scored 13.

For 1911-12, the Bulldogs went from worst to first, with Joe Malone having a spectacular season, to win the Stanley Cup as champions of the NHA. The Dogs' record improved to 10 wins and 8 losses while Malone scored 21 goals and Jack McDonald scored 18. In a Stanley Cup challenge, they crushed the Moncton Victorias in 2 games, 9-3 and 8-0, in the best of three playoff.

In their third season (1912-13), Quebec would again finish first overall with a record of 16 wins and 4 losses to retain the Cup. Joe Malone won the scoring race with an unprecedented 43 goals. His teammate, Tommy Smith, was a close second with 39. In a Stanley Cup challenge after the season the team easily beat the Sydney Millionaires in two games by a combined score of 20 to 5.

The Victoria Aristocrats of the PCHA next challenged the Bulldogs. The powerhouse Bulldogs expected to bowl over the Aristocrats, but were shocked after splitting the first two games and then losing 6-1 in the decisive third game. Fortunately for Quebec, and unfortunately for Victoria, the Stanley Cup Board of trustees did not recognise the challenge by the Aristocrats as being official and the Bulldogs were able to keep the Cup.

The following seasons would see the Bulldogs drop from the top of the league. They would finish third overall in each of the next three seasons and in the last NHA season (1916-17) went second overall. After their two Stanley Cup wins, though, they would never again challenge for the Cup.

National Hockey League and the move to Hamilton 1917-1925

With the end of the National Hockey Association and the start of the National Hockey League, the Quebec Bulldogs were invited to become a founding member of the NHL. Unfortunately, Quebec was unable to garner the required funds or merge with a top amateur team, and suspended operations for two seasons. While the team was suspended, their star player, Joe Malone, played for the Montreal Canadiens. When the Bulldogs resumed play for the 1919-20 season, Malone rejoined them. Malone would win the scoring championship that year with 39 goals. Despite Malone's scoring and the presence of players like Harry Mummery, the Bulldogs had a dismal season, finishing last, with four wins and twenty losses.

Before the 1920-21 season, the NHL took back the franchise, and sold it to Hamilton owners who moved the team to Hamilton where it became the Tigers. This helped to head off a potential competing league from setting up in Hamilton.[1]

The team played as the Hamilton Tigers in the NHL from 1920 to 1925. Due in large part to a players' strike in the 1925 NHL playoffs, the franchise was revoked a second time, in the summer of 1925 and the players bought out by the expansion New York Americans franchise. The Americans would play in the NHL from 1925 to 1942.

The last active Bulldogs player was Dave Ritchie, who retired in 1926.

On March 10th, the Bulldogs finished off their 1919-20 season (and their career) with a 10-4 win over the Ottawa Senators on home ice. 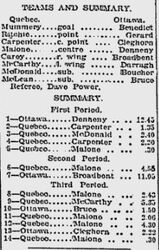