The Providence Bruins is an ice hockey team in the American Hockey League, and are the primary development team for the NHL's Boston Bruins. They play in Providence, Rhode Island at the Dunkin' Donuts Center.

The Providence Bruins began operation for the start of the 1992–93 AHL season after Providence mayor Buddy Cianci negotiated a deal with the owners of the Maine Mariners franchise, Frank DuRoss and Ed Anderson, to relocate their club.

The Bruins captured their first AHL Calder Cup in the 1999 playoffs, after a regular season in which they dominated the league with 56 regular season wins. Led by rookie head coach Peter Laviolette and paced by Les Cunningham Award winner Randy Robitaille, the Bruins went from only 19 victories the previous season, to dropping the Rochester Americans 4 games to 1 to skate away with the league championship. The P-Bruins main rival is the nearby Portland Pirates.

In the 2001–2002 season, the Providence Bruins contracted with then-13-year-old musician Ben Schwartz to work as the official organist at all home games. As a result, Schwartz, who provided music for seven years until the conclusion of the 2007–08 season, holds the distinction of being the youngest organist to ever work for a professional North American sports franchise in history.[1]

This market was previously served by 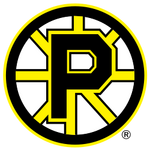 List of Providence Bruins alumni who played more than 100 games in Providence and 100 or more games in the National Hockey League: