The Prairie Senior Hockey League operated as an amateur senior league in the Canadian provinces of Saskatchewan and Alberta.

It was formed as a merger of the Saskatchewan Senior Hockey League and the Alberta Senior League in 1971. The league only lasted one season (1971-72).

In December the Stampeders went on a tour of Europe. When they returned in January they disbanded because the team had no more money. The other Alberta team from Edmonton remained in the league. It was decided that the Monarchs would not enter the league playoffs but represent Alberta in the Allan Cup playoffs. The other three teams from Saskatchewan would play off among themselves to decide that province's representative.

The Saskatoon Quakers folded after the season ended. What was to be a semi final series then became a final series between Regina and Yorkton.

Not surprisingly the league folded at the end of the season. This marked the end of top-level senior hockey in Alberta and Saskatchewan.

The Edmonton Monarchs advanced to the 1971-72 Western Canada Allan Cup Playoffs. The Calgary Stampeders folded in January. The Saskatoon Quakers folded after the season ended. 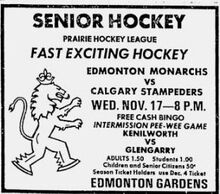 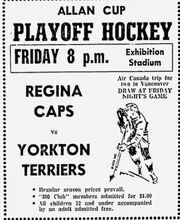