The Port Arthur Bearcats (Bear Cats) were a senior amateur ice hockey team based in Port Arthur, Ontario, Canada – now part of the city of Thunder Bay – from the early 1900s until 1970. Before settling on the nickname of Bearcats, the Port Arthur team played several seasons with unofficial generic names applied by fans and sportswriters, such as the Port Arthur Ports, Port Arthur Hockey Club, and the Port Arthur Seniors.

After the 1935 Allan Cup champion Halifax Wolverines disbanded, the Canadian Amateur Hockey Association (CAHA) chose the runnerup Bearcats to be Canada's representative at the 1936 Winter Olympics in Garmisch-Partenkirchen, Germany. The Bearcats won the silver medal for Canada.[2] The team remained on an exhibition tour in Europe after the Olympics and returned late to Canada. CAHA president E. A. Gilroy upheld the ruling by W. G. Hardy to exclude the team from the 1936 Allan Cup playoffs.[3][4]

The Bearcats were chosen to represent Canada at the 1940 Winter Olympics, and CAHA vice-president Frank Sargent was placed in charge of the upcoming tour of Europe.[5] The CAHA approved $5,000 towards travel expenses, and the team would receive any profits from exhibition games played while in Europe.[6] The Bearcats requested a guarantee from the CAHA against financial loss,[7] and Sargent expected a meeting to decide on the travel demands.[8] The 1940 Winter Olympics were ultimately cancelled after the German invasion of Poland in September 1939.[9]

The team suspended operation in 1943 and 1944, due to World War II. The Bearcats returned in the 1945–46 season, continuing operation until the merger of the cities of Port Arthur and Fort William, with the Fort William Beavers joining the Bearcats to form the Thunder Bay Twins for the 1970–71 season. This new iteration would appear in six more Allan Cup finals, including five Allan Cup wins. This team folded after finishing as runner-up in the 1991 Allan Cup.[citation needed]

The Bearcats and the successor Twins combined for 13 Allan Cup competitions, winning a combined 9 championships.[10]

The 1936 Olympic silver medalist Bearcats team was inducted into the Northwestern Ontario Sports Hall of Fame in 1987.[11]

In the winter of 1961–62, the Bearcats represented Canada in a European exhibition game tour, facilitated by Fred Page.[12] 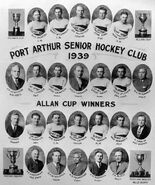