Philip Anthony "Espo" Esposito (b. February 20, 1942 in Sault Ste. Marie, Ontario, Canada) is a Canadian broadcaster, and former professional ice hockey executive, coach and player. A member of the Hockey Hall of Fame, he played 18 seasons in the National Hockey League for the Chicago Black Hawks, Boston Bruins and New York Rangers. He is considered one of the greatest players of all time, and is the older brother of fellow Hall-of-Famer Tony Esposito, a goaltender.

After retiring as a player, Esposito served as head coach and general manager of the New York Rangers before co-founding the Tampa Bay Lightning. He was the principal studio analyst for the NHL on Fox 1995–1998. He now serves as Tampa Bay's radio colour commentator.

Esposito signed with the Chicago Black Hawks as a teenager and was assigned to the Sarnia Legionnaires Jr. 'B' hockey team for the 1960–61 season. In just 32 games with the Legionnaires, he scored 47 goals and 61 assists, for 108 points. It was a scoring pace of 3.3 points per game. In a playoff game, he scored 12 points in one game as the Legionnaires advanced to the Western Ontario final before being eliminated. After a sparkling junior season with the St. Catharines Teepees of the Ontario Hockey Association in 1962, Esposito spent two seasons with Chicago's minor league affiliate, the St. Louis Braves, scoring 90 points in his first season and 80 points in only 46 games in his second.

Midway through the 1964 season, Esposito was called up to the parent Black Hawks to make his NHL debut. Centreing for the great Bobby Hull beginning in the 1965 season, he proved himself a quality playmaker, twice finishing amongst the League-leading scorers over the next three seasons.

On May 15, 1967, Esposito was dealt to the Bruins in a blockbuster trade along with Ken Hodge and Fred Stanfield for Pit Martin, Jack Norris, and Gilles Marotte. The trade totally transformed the Bruins, who made the playoffs for the first time in eight seasons during 1968. Hodge became Esposito's right winger on the Bruins first line, had several 100+ point seasons and was twice a First Team All-Star. Stanfield centered Boston's second line, manned the point on the power play for six seasons and scored more than a point a game during the playoffs of Boston's Cup wins in 1970 and 1972.

However, Esposito was the key to the trade and blossomed into the greatest scorer of his day. In 1969, he became the first NHL player to score 100 points in a season, far eclipsing the "century" mark with a record 126. He scored 99 points in 1970, then reached triple digits again the next five years running. Along the way, he captured the Art Ross Trophy as the top regular season scorer in 1969, 1971 to 1974, and led the League in goals six straight seasons between 1969–70 and 1974–75.

Esposito was named to the NHL's First All-Star team six consecutive times (from 1969 to 1974), and won the Hart Memorial Trophy as the NHL's most valuable player in 1969 and 1974. The Boston fans, celebrating his scoring touch during his heydey, displayed bumper stickers that read, "Jesus saves, Espo scores on the rebound."

Esposito's skating ability was under-rated. He was an excellent puck carrier and used his size and strength to beat defenders to the outside while keeping the puck out of reach. He also possessed incredible stamina and long reach that enabled him to "rag the puck," holding onto it for long periods of time in the face of opponents' checks and thus enabling his team to kill off penalties. Teammates often joked that Esposito would play long shifts, and remain on the ice after his linemates had gone off for a change. He was best known for his unmovable presence in front of the opposition net from which he could score from all angles with a snap shot, which he learned from Bobby Hull. Esposito said tongue-in-cheek, "Scoring is easy. You simply stand in the slot, take your beating and shoot the puck into the net." Actually, Esposito had quick hands and was excellent at finding open spaces, often in the "high slot" where his one-time shot was deadly.

During the 1970–71 season, Esposito shattered the record for most goals in a season, finishing with 76. The mark stood until 1982, when Wayne Gretzky scored his 77th, 78th and 79th goals against the Buffalo Sabres on February 24, 1982, at the Buffalo Memorial Auditorium. Esposito was on hand to present the game puck to Gretzky. Esposito also set the single season point-scoring record in 1971 with 152, a mark later raised by Gretzky to 215. Only three others have reached the 150 point plateau — Mario Lemieux (4 times), Steve Yzerman and Bernie Nicholls. Only Gretzky, Lemieux, Brett Hull, Teemu Selänne and Alexander Mogilny have matched or bettered Esposito's 76 goals in a season. The 1970 season also saw Esposito shatter the single season mark for shots on goal, tallying 550. Only one other player has come within 100 shots of this record, Alexander Ovechkin in 2008–09, in a season that was four games longer.

During his prime, Esposito centred one of the most renowned forward lines in history, featuring Ken Hodge on his right wing and Wayne Cashman on his left. Esposito and fellow superstar Bobby Orr had an uncanny knack for finding each other with passes. Often, this was at full speed at the opposition blueline, resulting in breakaways. Both led the Bruins to Stanley Cup victories in 1970 and 1972, and first-place finishes in the NHL in 1971, 1972 and 1974.

After his performance in the Summit Series, where he was the inspirational leader for Canada and its leading scorer in the series, Esposito won the 1972 Lou Marsh Trophy as Canada's outstanding male athlete of the year and was made an Officer of the Order of Canada. He also scored the first goal of the series and had 2 goals and 2 assists in the deciding Game 8, setting up the series winner by Paul Henderson. During that series, his scolding of Canadian fans, who booed the national team after a 5–3 loss to the Soviet Union in Game Four, was credited with firing up his teammates.

"If the Russian fans boo their players in Moscow like you people are booing us, I'll come back and apologize personally to every one of you, but I really don't think that will happen. We gave it and are doing our best. All of us guys are really disheartened...we came out here because we love Canada. They're a good hockey team, and we don't know what we could do better, but I promise we will figure it out. But it's totally ridiculous, I don't think it is fair that we should be booed."

Esposito also played for Canada in the inaugural 1976 Canada Cup, on a line with Hall-of-Famers Bobby Hull and Marcel Dionne. The following year, he would represent Canada once more in the 1977 World Championships in Vienna.

Espo was traded to the Rangers on November 7, 1975 with Carol Vadnais for Brad Park, Jean Ratelle and Joe Zanussi. While his numbers had dwindled due to age, he still was a point leader in New York, averaging about a point per game for the Blueshirts on the full seasons he spent there. He retired in 1981.

Esposito became general manager and head coach of the Rangers in the middle of the 80's. His tenure earned him the nickname "Trader Phil" for the numerous trades he conducted.

Esposito was, with his brother, among the main persons responsible for the arrival of the Tampa Bay Lightning in the NHL. He is today the team's radio colour commentator, as well as the co-host of a call-in radio show on XM Satellite Radio's Home Ice channel.

Esposito served as general manager and head coach of the Rangers for three years in the mid-1980s, during which he earned the nickname "Trader Phil" for the numerous transactions he made. During his tenure as GM, he made more trades than the Vancouver Canucks had made in the entire 1980s. While serving as GM, two of his most famous trades included the trade for the legendary Marcel Dionne and one which he sent a first round pick to the Quebec Nordiques as compensation for signing Michel Bergeron to be the Rangers' head coach.

Esposito moved on to found the NHL's Tampa Bay Lightning but faced competition from the Compuware Group, which wanted to place a team in nearby St. Petersburg, Florida. It was proposed to Esposito that he merge his bid with the Compuware Group, which he refused. His reputation and force of personality was widely credited with winning the expansion bid for Tampa Bay in 1992, serving as the team's president and general manager until 1998. Compuware eventually purchased the Hartford Whalers.

Esposito was elected to the Hockey Hall of Fame in 1984. On December 3, 1987, his #7 jersey was retired by the Boston Bruins in an emotional ceremony where the then wearer, superstar defenceman Ray Bourque, pulled off his #7 jersey to reveal his new number, 77, dramatically "surrendering" his old number in Esposito's favour (coincidentally, Esposito wore #77 with the New York Rangers, because #7 was already being worn by Rod Gilbert). Esposito was "visibly moved" when Bourque showed the Boston Garden crowd his new number, which he used for the rest of his career. Esposito was also on hand in Boston to hand Bourque his retired number after the latter retired.

Esposito's younger brother Tony is also an honoured member of the Hockey Hall of Fame. 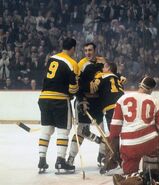 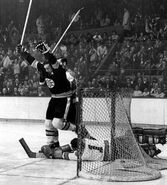 Clarence Campbell presents trophies to Phil Esposito and Bobby Orr for the 1968-69 season.

Phil Esposito scores his second goal of the game, January 29, 1970.

Phil Esposito suffers torn right knee ligaments and is lost for the playoffs, Game 2 of the 1973 Stanley Cup Quarter-finals, April 5, 1973.