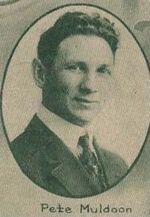 Pete Muldoon (1881 – March 6, 1929), born Linton Muldoon Tracy, was a Canadian player in the western United States, particularly known for bringing a Stanley Cup championship to Seattle, Washington. He is known best for reportedly putting a curse on the Chicago Black Hawks, as well as team owner Major Frederic McLaughlin, after Muldoon was fired at the end of the 1927 season; however, it has been alleged that a Toronto sportswriter had come up with the "curse" due to a bout of writer's block in 1943. Muldoon was the Black Hawks' first head coach.

Muldoon was born in St. Marys, Ontario, as Linton Muldoon Tracy. He played hockey in the OHA in the 1900s before moving to the Pacific coast in order to pursue a career as a boxer. He changed his name to Pete Muldoon during his boxing career. Muldoon won regional titles in both the middleweight and light heavyweight divisions while boxing.

Muldoon was accomplished at other sports, including lacrosse. He played professionally for a Vancouver club in 1911. He was also an ice dancer who was able to skate, as well as play hockey, while on stilts. In 1914, he took over as the coach and manager of the Portland Rosebuds. Muldoon led them to the PCHA championship, making Portland the first team from the United States to compete for the Stanley Cup. For the 1915 season, Muldoon changed teams, and went to Seattle to manage a new team in the PCHA, the Metropolitans. Muldoon spent eight seasons coaching in Seattle, and amassed a record of 115 wins, 105 losses, and four ties. The Metropolitans competed for the Stanley Cup. The Mets played for the Stanley Cup three times under his leadership, and winning it once in 1917 during their first trip. In 1919, the Metropolitans made for the second time, but the series against the Montreal Canadiens was cancelled after 4 games due to a flu epidemic. Seattle lost in the Stanley Cup finals in the next year.

The Seattle Metropolitans ceased operations in the spring of 1924. Muldoon returned to Portland, and moved on to the Chicago Black Hawks of the NHL in 1926. In Chicago, Muldoon was appointed the first head coach of the new team. He was fired at the end of the season, in the spring of 1927, as the team owner was not satisfied with the team's third-place finish, as they finished with a 19–22–3 record, for a .466 winning percentage over 44 games.

After spending a year in Chicago, Muldoon returned to Seattle. He became involved in efforts to bring a professional team back to Seattle, as a new arena was constructed in 1928. Muldoon, with the help of a group of investors, established the Seattle Ice Skating and Hockey Association, while aiding to establish the PCHL. This new league had its first season in 1928, and the Seattle team was dubbed the Eskimos.

Muldoon was highly upset about being fired after only one season by owner Frederic McLaughlin. Muldoon was fired because Chicago had finished third in its division during the 1926–27 season, but McLaughlin felt the team should have finished first. Muldoon was then reported to have placed an Irish curse on the Hawks that would keep them out of 1st place forever. It is unknown if this actually happened, as it has been alleged that it was a hoax by a Toronto sportwriter.

In the spring of 1929, Muldoon went to Tacoma with co-owner and local boxing promoter Nate Druxman to search for a location to build a new rink in order to establish a team. While in Tacoma, on March 6, 1929, Muldoon died due to a heart attack. Without their coach, the Seattle Eskimos were able to win a playoff series against Portland, before losing to Vancouver in the league finals. The following season the Eskimos established the Pete Muldoon Trophy, presented to the player "deemed most inspirational by his teammates". It was awarded for a few seasons, and disappeared from records during the Great Depression years.