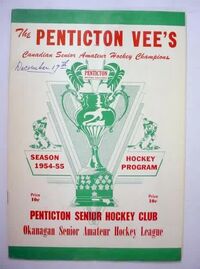 The Penticton V's were a senior team in Penticton, British Columbia.

They were named after three varieties of peaches whose names all began with V.

They almost won the Allan Cup in their second season in 1952-53, losing the final to the Kitchener-Waterloo Dutchmen,

The nest season they went all the way, beating the Sudbury Wolves in a series that went all seven games. This qualified them to go to the 1955 World Championship and avenge Canada's loss in 1954.

That they did, becoming the first Canadian team to beat the Soviet Union,

After that win the team went into the doldrums. A small city like Penticton could not really support a top-notch senior team,

In 1960-61 the team folded, only a few months before the entire league collapsed.

The Okanagan Senior League folded after the 1960-61 season.

Retrieved from "https://icehockey.fandom.com/wiki/Penticton_V%27s?oldid=604323"
Community content is available under CC-BY-SA unless otherwise noted.