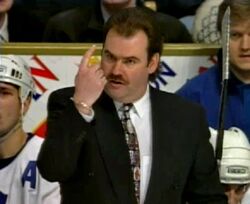 Pat Burns (April 4, 1952 in Montreal, Quebec - November 19, 2010 in Sherbrooke, Quebec) was the former head coach of the National Hockey League's New Jersey Devils, Montreal Canadiens, Toronto Maple Leafs and Boston Bruins. In fourteen seasons he has coached 1019 games and has an overall record of 501-350-161-14.

He has won three Jack Adams Awards with three different teams (Montreal in 1989, Toronto in 1993, and Boston in 1998). This makes Burns the only three-time winner, and the only one to win in his first year as coach. He also coached for the QMJHL Hull Olympiques and AHL Sherbrooke Canadiens. As a player, he played three games with the London Knights of the Ontario Hockey League scoring one point. He was head coach of the Devils from June 13, 2002 to July 2005, winning one Stanley Cup during his tenure. Burns left the team after being diagnosed with cancer for a second time.