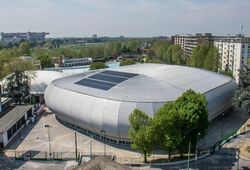 The Allianz Cloud previously known as Palazzetto Lido Sport, commonly known as PalaLido, is a multi-purpose indoor arena that is located in Milan, Lombardy, Italy. The arena's primary use is to host basketball and volleyball games, but it can also be used to host handball, tennis, gymnastics, and wrestling. The arena currently has a seating capacity of 5,420 for sports events. It will host ice sledge hockey in the 2026 Winter Paralympics.

It is one of two venues to be used for ice hockey, along with PalaItalia Santa Giulia.