When the National Hockey League's Ottawa Senators finally left Ottawa for St. Louis in 1934, the local arena looked around for a replacement.

The Senators continued in the group as it changed its name to the Quebec Senior Hockey League in 1938. the team was replaced by other Ottawa teams during World War II and then rejoined the league in 1945-46.

In 1947-48 the Senators finally won its first playoff championship and then the Eastern Canada Senior Title. They lost the Allan Cup Final to Edmonton.

In 1948-49 they repeated as playoffs champions and this time were able to beat the Regina Caps in the Allan Cup Final.

The Senators continued with the league as it changed its status from senior to major to minor pro. But in 1954-55 the team folded, a victim of televised hockey games that had started in Canada in 1953,

Another version of the Senators played in the Ottawa City Intermediate League for the 1938-39 season, the league was an experiment as five a side hockey and only lasted one season.

From 1942 to 1945 the Ottawa Commandos played in the Quebec Senior Hockey League. 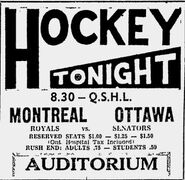 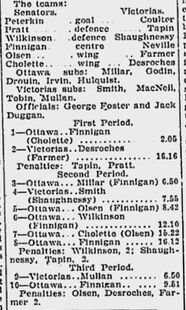 The Senators' first game on Nov. 10, 1934. They beat the Montreal Victorias 7-3 at home. Eddie Finnigan scored the team's first goal. 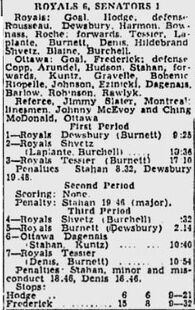 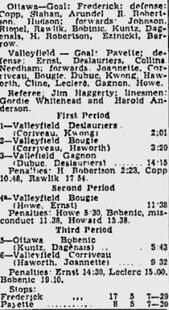 Summary of the last Senators' game on December 19, 1954 - a 5-1 loss on the road against the Valleyfield Braves.
Add a photo to this gallery
Retrieved from "https://icehockey.fandom.com/wiki/Ottawa_Senators_(senior)?oldid=641329"
Community content is available under CC-BY-SA unless otherwise noted.